Will webOS replace Windows on all of your smartphones?

Microsoft will continue and will always be a huge strategic partner for Hewlett-Packard. Our focus is to create choice for customers around those products and services that will allow them to connect to the information they need as quickly and as safely as they can.

via HP Gets Its Hands on Palm – BusinessWeek.

Sounds like a definite non-answer.  My bet is that they have not decided but that when they will decide it will be to show Microsoft the door.

“During a conference call about HP’s acquisition of Palm Wednesday, Todd Bradley, executive VP of HP’s Personal Systems Group, said that there are “a lot of opportunities” with the purchase. Namely, he said, HP could use the WebOS mobile operating system as a touchscreen interface for new hardware such as a tablet or netbook.

Palm CEO Jon Rubinstein and Brian Humphries, HP’s senior VP of Strategy and Corporate Development revealed that HP plans to “double down on WebOS,” which is considered the “prized asset” of the acquisition. The two reportedly mentioned the scalability of WebOS, implying that HP plans to bring the platform to multiple hardware form factors. HP even said it has already tested WebOS for its scalability.”

Oh, and someone from HP also said they will still do business with Microsoft.

Only Microsoft and Google are still betting that licensing is going to be the way forward but each is hedging its bets: Microsoft with Kin and Google with Nexus One.

Can anyone seriously suggest that the mobile computing industry is rapidly moving toward horizontal modularity or even consolidating like the Operators are hoping?

Before you answer, consider also other horizontal players that are no longer with us: PalmSource, Symbian (and, give it a year, Windows Mobile). 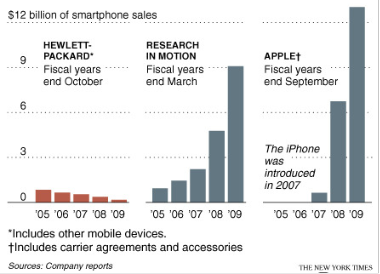 The consequences of licensing a mobile OS:

Sales of H.P.’s hand-held products, including its iPaq smartphone, dropped to $25 million in the quarter, down from $57 million in the same period last year. Apple, by contrast, had sales of $5.6 billion for iPhones and related products during its most recent quarter.

To put it in more perspective, $25 million at an ASP of $350 a phone means HP sold about 70k phones last quarter, or what Apple sold every 17 hours.