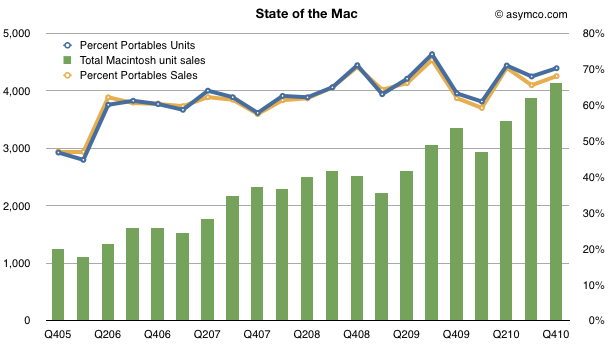 One significant reason for the growth has been the shift from desktop to portables. The lines show how the percent of portables went from about 50% to 70% of units and sales in four years. END_OF_DOCUMENT_TOKEN_TO_BE_REPLACED

When the iPhone vs. Android rhetorical war heats up, both sides bring up the history of Macs vs. Windows PCs. The commonly held thesis is that Windows triumphed as the PC was commoditized (and modularized). This triumph was at the expense of the over-serving and over-priced Mac.

This is a largely accurate view of what happened during the 90s. But the problem with this thesis is that (1) the PC’s job has been slowly changing in the last decade (2) the Mac keeps growing faster than the PC and (3) Apple keeps capturing a vast portion of the profits in the PC industry.

These anomalies or contradictions to the thesis imply that something changed. What changed and can these changes turn the tables on the market and create an opportunity for a new computing disruption? END_OF_DOCUMENT_TOKEN_TO_BE_REPLACED

Increasingly, companies are giving their employees a choice to either use Microsoft Windows PCs or Apple Inc.’s Macs, the analyst said. And, increasingly, employees are choosing Mac over Windows. To boot, Chowdhry said 70 percent of college freshman are entering school with Macs, up about 10 percent to 15 percent from a year ago.

via Microsoft shares retreat after downgrade.

[Update] Chowdry’s estimate seems an exaggeration but Mac share on campus seems to be growing. The most current data shows a probable 50% penetration in private colleges (my estimation is 70% is accurate for Ivy League schools) but a probable 20% penetration at public schools.  Still way above retail share in the US (10%) and way above corporate share of practically naught. 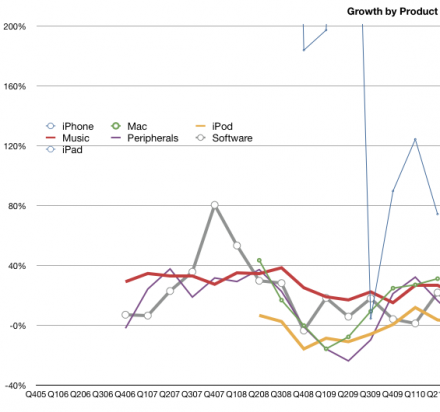