When mobile platforms are discussed, the conversation frequently turns to market share battles between Android and iOS. I’ve pointed out before that the problem with this reasoning is that market share in a market that’s growing at 90% is a false measure of performance.

The more important measure is how much of the non-smartphone market is being taken by smartphones and how fast the whole phone market is growing. Competition with non-consumption is very different from platform warfare.

But even when discussing the rivalry between current platforms, the Blackberry and Symbian are often overlooked as contenders. Windows Phone and iOS come in and out of discussion only on the basis of press releases. The truth is however that Symbian, Windows, Blackberry are not going to disappear anytime soon.  Why is that? END_OF_DOCUMENT_TOKEN_TO_BE_REPLACED

Noteworthy data (with my notes in parentheses.)

Following up on survey data showing that up to 25 percent of Americans have moved to smartphones, here is another survey (Comscore) which shows that US smartphone users are at about 23 percent.

Comscore also surveyed European countries, and we can compare the popularity of smartphones vs. the US.

I also indexed the share to population to show the relative populations of smartphone users across these countries.

It may come as a surprise to some that smartphones are more popular in the UK, Spain and Italy than in the US. Considering that these are countries with lower levels of disposable income, and that in Italy and Spain pre-paid plans are overwhelmingly more popular. Buyers in those countries are much more likely to pay full, unsubsidized prices plus 20% or more VAT. Overall the price differential for an Italian buying a smartphone vs. an American is likely to be a factor of 5. It gets even more peculiar when you consider that many Italians have more than one phone, with overall phone line penetration above 100%.

The explanation for this remarkable appetite for smartphone goodness is the early lead that Symbian had in Europe. Buyers who entered the phone market ten years ago became accustomed to upgrading their Nokia phones. Symbian phones were aspirationally positioned as feature-rich camera and messaging devices. Many were also purchased without data plans and were thus used as high-end feature phones. In other words, consumers in those countries were comfortable paying full price for unlocked Nokia devices and using them with multiple SIM cards.

This can be seen in the share of Symbian in these charts:

The data points to how normative behavior evolved and how different that can be even among culturally aligned Western nations. When looking at Asia and South America, it gets even more interesting.

Whereas in Europe it was Symbian, in the US RIM got the ball rolling.

The contribution of these platforms in shaping expectations, not to mention pricing, for the iPhone and Android should be noted.

It’s hard to get excited about the new RIM Blackberry Torch.  It’s not exciting in a positive way and not exciting in a negative way. It’s just more of the same and the same is not all that bad. Then again, the same is not all that good either. Every piece of the Torch product is playing catch-up with others’ innovations without enhancing the core innovation RIM itself brought into the market years ago.

RIM has a significant but deteriorating share and is a company that has done very well as an entrant in a space dominated by larger incumbents.  But there is a strong smell of Palm about it.  The musty smell of decomposing innovation. Wall Street seems to smell it too (two year stock price chart relative to AAPL below)

The problem seems to be that, like in Palm’s case, mobile computing is a game for big companies.  If you ask why Palm and RIM became uncompetitive you get two different reasons. Palm could not do hardware and distribution well and RIM can’t do software well. But these reasons have remedies which neither company can bring to bear: resources and processes. Palm did not have the resources for distribution and production and RIM did not have the processes to be a software platform company.

Their values and priorities are adequate but competitiveness today, in this market, requires projecting market and development power.

I can only conclude that RIM is simply too weak to make it in the long run. 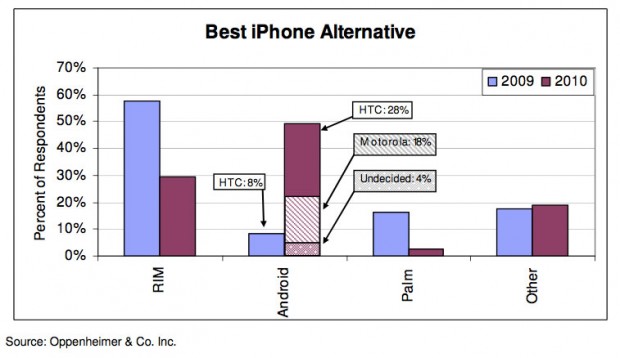 Following up on my last post on how misleading US-only share comparisons can be, I decided to draw charts to visualize the comparison.

As Android and iPhone compete in various ways, it’s hard to see which is the preferred choice given a direct comparison.  In other words, iPhone and Android devices rarely are placed next to each other with similar terms.

Take the US market for example.  The overall data from NPD suggests that last quarter Android reached 28% share vs. 21% for iPhone.  Many of those Android devices were new to market or at least newer than the iPhone which in Q1 was coming to the end of its product cycle.  Second, pricing for Android devices seems to have been quite aggressive with buy one get one free sales.  But I won’t dwell on tactics now; what I do want to note are the differences in share between AT&T users and non-AT&T. 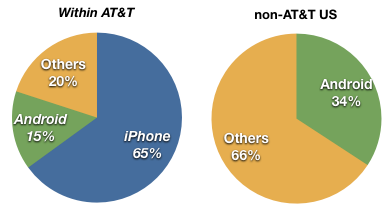 Note that within AT&T, iPhone outsells Android over 4 to 1.  iPhone also outsells “others” (mainly RIM) more than 3 to 1.  However, outside AT&T, where the iPhone is not available, Android does not outsell “others”.

If we exclude the US altogether, we also see that Android does not have a great distribution. 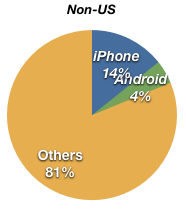 Outside the US, the iPhone also outsells Android nearly 4 to 1, but it has a way to go before challenging Symbian which makes up the bulk of “Others”.

So in markets where Android is head-to-head with the iPhone (AT&T and non-US markets), iPhone’s lead is quite high (still).  The possibility still exists that Android will overtake iPhone given the broad licensing and distribution, but it’s not necessarily a given.  And in any case, iPhone is not the market share leader today and that leadership does not seem to be their objective (note the pricing).

The bigger question is what will happen to RIM and Symbian as Android grows.

Apple already announced that they see 100 million iPhone OS devices sold by this summer. The installed base for iPhone OS devices is likely to be much greater than 40 million since most of the 85 million devices sold as of today were purchased less than 2 years ago. With the iPad and the iPod broadening the portfolio, the Apple mobile platform will grow more rapidly than RIM’s leading to increasing network effects.