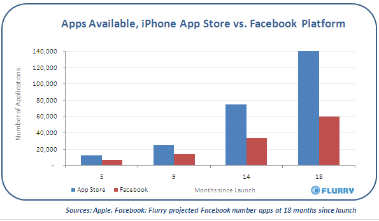 Since the App Store launched in July 2008, 35,000 unique companies have released applications, which translates to 58 new companies launching apps each day. This appears to be the largest amassing of 3rd party developer support by any development platform in such a compressed timeframe. For example, comparing the number of applications created for the Facebook platform to the App Store over their respective first 9 months, Apple boasted 25,000 apps to Facebook’s 14,000. Comparing respective growth in apps after 14 months, Apple had widened its gap to 85,000 apps over Facebook’s 33,000. At the App Store’s 18 month mark, reached this January, the number of iPhone apps was reported to have exceeded 140,000 compared to 60,000 we estimate Facebook had reached over the same number of months. Apple now leads Facebook with over twice as many available applications. We believe the difference in growth rates can be attributed to the App Store providing better monetization possibilities for application developers than Facebook. Developers, like all rational companies, pursue markets where the path to revenue generation is clear.