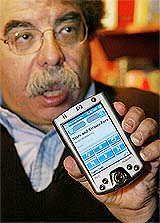 I knew of Dick Brass at the time when he was promoting ClearType inside Microsoft. We met his team to consider licensing our table recognition algorithms for the production of ebooks for Microsoft Reader, an early ebook reading solution for the PocketPC. It was then I learned about plans for “reading solutions” from Microsoft, almost 10 years ago.

Now he writes about the tragedy of Microsoft’s complete absence from the future of mobile computing.

Part of the answer, Brass writes, is that Microsoft put too much faith in aggressive managers (like himself) who nurtured a culture of conflict. But mostly, he says, it’s because of inter-departmental bullying by Microsoft’s established divisions and a “dysfunctional” corporate culture that thwarts innovation.

To support his contention, he offers a couple of telling anecdotes in which he does everything but name names:

Microsoft’s ClearType display technology languished in the lab for years, he says, because engineers in the Windows group “falsely claimed” it made the display go haywire, the head of Office products said it was fuzzy and gave him headaches, and the vice president for pocket devices was said he’d support ClearType only if Brass transferred the programmers to his control.

In 2001, the vice president in charge of Microsoft Office refused to modify Word, Excel and Outlook to work properly with Brass’ tablet. Result: “if you wanted to enter a number into a spreadsheet or correct a word in an e-mail message, you had to write it in a special pop-up box, which then transferred the information to Office. Annoying, clumsy and slow… To this day, you still can’t use Office directly on a Tablet PC. And despite the certainty that an Apple tablet was coming this year, the tablet group at Microsoft was eliminated.”

Brass believes that the intense, sometimes cut-throat, internal competition that Bill Gates fostered among his managers has devolved into something uncontrolled and destructive: “The big established groups are allowed to prey upon emerging teams, belittle their efforts, compete unfairly against them for resources, and over time hector them out of existence.”

He also gives a nod to the modular/integrated dichotomy to which we are always pointing accusing fingers:

“Part of the problem is a historic preference to develop (highly profitable) software without undertaking (highly risky) hardware. This made economic sense when the company was founded in 1975, but now makes it far more difficult to create tightly integrated, beautifully designed products like an iPhone or TiVo. “

“It’s not an accident,” he writes, “that almost all the executives in charge of Microsoft’s music, e-books, phone, online, search and tablet efforts over the past decade have left.”