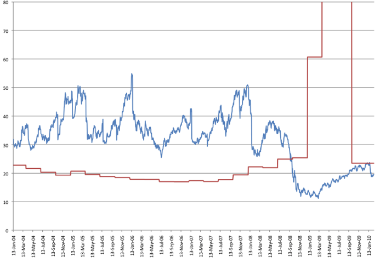 Following up on the Apple Valuation Entry, I went to the data and pulled the historical P/E for Apple back to include all of 2004 (in blue) and did the same with the S&P P/E (in red).

This reversal happened during a time of recession when, in contrast to most companies, Apple kept growing. The spike in the S&P P/E is due to a dearth of earnings, while Apple had increased earnings, sometimes to new records.

As a “premium” brand it’s perhaps perplexing that Apple seems to be acting as a counter-indicator to macroeconomic conditions.

Expectations for Apple to decline in times of economic contraction did not come true and as recovery seems near, Apple appears to be discounted.