My recent exposé of Apple’s cash (and cash equivalents and long-term securities and short-term securities) drew quite a bit of attention, which is good. Because it needs to be demystified. However, the story does not end there. Part of the problem of cash is that the liquid stuff can often itself change in perceived value due to mis-management.

The value in liquid assets can be returned to shareholders in the form of a dividend, which means double taxation on profits; not the best idea usually. Or it can be returned in the form of share re-purchase which tends to have only a temporary effect on share prices, again not a great return. The value can also be increased by means of investment in projects that return higher than what investors expect their cost of capital to be. This is the best option but investment is difficult when the amount involved is so big that no project or set of projects could possibly cost enough to employ the capital. Finally, the value can be completely destroyed through large acquisitions.

I say destroyed because the history of large acquisitions is almost universally known to be value destructive (1). The urge to M&A is why cash on the balance sheet for large companies is usually discounted and share prices “get no credit for it.” This is plaguing Apple with a P/E ex-cash in the teens.

Companies faced with low growth are more likely to blow their cash on desperate acquisitions than those with high growth, but the best way to judge the probabiliy of cash evaporation is by looking at management track records.

Which leads us to Microsoft.  Their pursuit of Yahoo shows how desperate they had been in trying to catch Google and how poorly that would have turned out. Having failed only because Yang refused to sell, Microsoft would have gone through a large part of its cash and even raised debt to finance a dud.  With this propensity, it’s no wonder that Microsoft’s cash is considered an endangered quantity.

Microsoft used to have the largest cash position in tech. They still have $44.5 billion–a mere billion or so less than Apple. Some of the value already evaporated on dividends and medium sized acquisitions ($500 million for Danger that ended up as Kin(dling)). The chances that they’ll blow billions again on desperate means to chase competitiveness are high. I would say it’s a certainty.

On the other hand we have a high growth company like Apple that has not traditionally spent money on business acquisition. (They do spend on asset acquisitions–IP, code, developers but not on new business models.) Thus, on reputation alone, Apple’s cash can be considered “safer” and hence worth more than Microsoft’s.

Whether Apple can expose that cash to risk that enhances its value is another matter, but their CEO is on the record stating that “it’s not burning a hole in their pocket” and the CFO repeats every quarter he is intent on its preservation.

This, in my opinion, makes the difference between Apple’s $45 billion and Microsoft’s $44 billion a lot more than $1 billion.

(1) Various studies have shown that at least 50% of acquisitions have been rated as failures. See failure rates by various studies charted below. Source: Prof. Dr. Thomas Straub (2007) “Reasons for frequent failure in Mergers and Acquisitions” 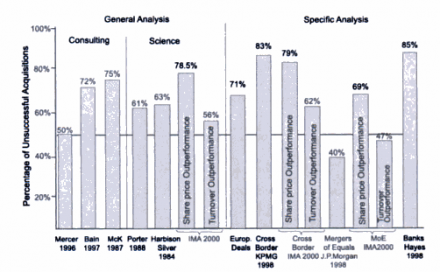