After ASP, Sales, and Unit Volumes we look at the three year history of operating margins for the seven most significant mobile phone vendors (Nokia, Samsung, LG, Motorola, Sony Ericsson, RIM and Apple).

The following chart shows the OM from mobile phone sales. These figures are as reported by the companies with the exception of Samsung and Apple. Samsung reports OM for its telecommunications unit as a whole and we have to assume that it’s largely accurate for mobile phones. Apple does not report margins for its iPhone but it’s possible to estimate gross margin percent for the iPhone and then subtract its overall OPEX as percent of sales. This assumes that OPEX is allocated to the iPhone in proportion to sales, which is the best assumption we can make at this time. 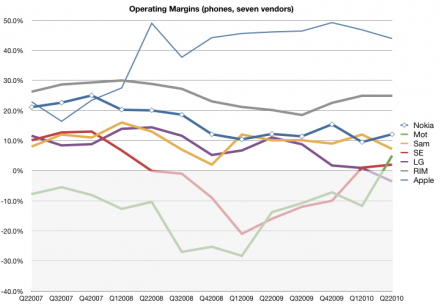 The data shows that the iPhone has been considerably more profitable, due mostly to a high ASP, than other vendors. Motorola and Sony Ericsson have been “underwater” with respect to margin for much of the time period, with LG recently dipping into the red.

Nokia’s margin erosion is a source of significant angst but note that it has just reached Samsung’s historic level (around 10%). LG, long seen as an up-and-coming vendor who took over the number three spot from Motorola is shown to have done so with moderate-to-low profit margins.

Overall, the phone incumbents have an unweighted average operating margin of 4.5%, down from 8.6% three years ago. In contrast, RIM and Apple have an average OM of 34%, up from 24%.  In other words, profitability has halved for the volume leaders while it has increased nearly by half for the entrants.

This goes a long way toward explaining the “smartphone gap” which is being filled by Android. As vendors see their unit growth, ASP and operating margins under pressure from low end disruptors, there is a tendency to flee to the high end that smartphones represent. Android offers an irresistible siren’s song.