I took the venerable Consumer Platform Adoption Ramps chart and added Android and the latest data on iTunes, iPod and iOS.

To make it more readable (but conceptually more complicated) I put the data on a log chart. 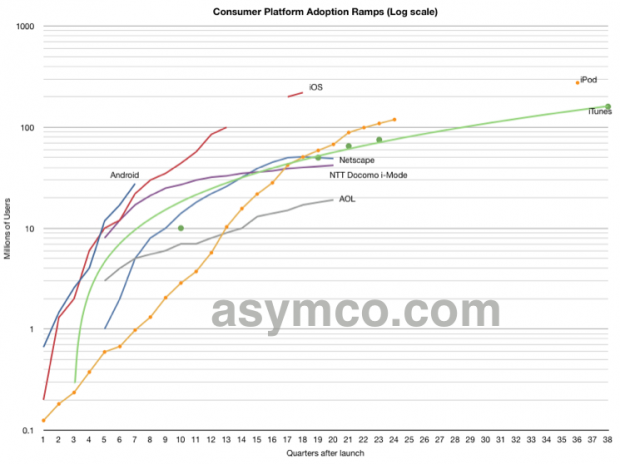 The time span covered is nine and a half years. The top of the graph marks the one billion threshold. Reaching one billion in less than 10 years is an interesting challenge for any platform and, at first glance, it seems that both iOS and Android have a shot at it. This does not seem likely for any of the other platforms.

The challenge is that as penetration grows, it’s natural for the slope for the lines to become shallower. Some platforms are simply not able to address one billion users:

In contrast, mobile phones in general and smartphone platforms in particular have potential to reach a billion users (per platform.)

To wit, note that iOS and Android have similar curves to date and are both likely to overtake iPod and any other contender.

So for the obligatory theological question: Will Android follow the curve of iOS or will it diverge and continue on a steeper trajectory? Does it matter?