In this year’s third calendar quarter earnings call (October 18, 2010) Tim Cook was asked again whether the future iPhone non-exclusive subsidy will affect the iPhone revenues and again Tim Cook repeated that it won’t.

And what is your experience then when you’ve gone non-exclusive from a subsidy and margin standpoint on the phone, have you had to give anything up in the past?

We don’t give specific information out on the margins. But I think you can look at our ASPs and see that they’ve generally stayed above $600, and that’s despite opening up several markets from an exclusive market to a non-exclusive market.

The recurring assumption that the loss of AT&T exclusivity will cause iPhone price erosion is wrong and has been evident in the sales data for over a year now. Not only did Cook state clearly that there is one price for iPhone to the channel regardless of exclusivity but the price data shows that as Apple moved to non-exclusives in many regions of the world, the ASP remained fairly constant: 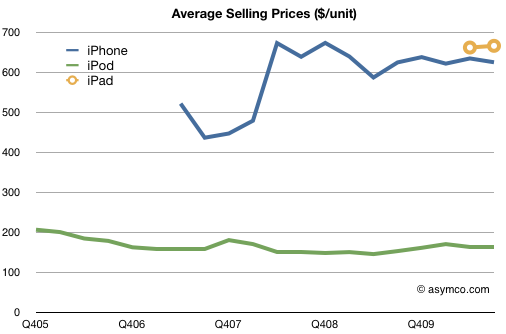 Over the period when the blue line has been flat, Apple moved a number of markets from exclusive to non-exclusive.  There are three main countries where iPhones have a contractual exclusive relationship. That is the United States, Germany and Spain. (China and Japan are exclusive due to network technologies). All these markets will go to non-exclusive next year. I don’t expect any change in the ASP as a result.

The final data point comes from AT&T themselves when they revealed the price they paid for the iPhone was roughly the same as the ASP shown above.