When I wrote my opinion on the future of publishing (Citizen Publisher), I focused my lens on books and magazines. Published works that have relatively low time-sensitivity and hence relatively long shelf life are quite different from newspapers which package material with very brief temporal relevance.

To give you an idea of how important the printing plant is, consider that a huge proportion of a newspaper’s assets are tied up in its printing plant. That plant is so large and so demanding that it ends up causing the whole business to revolve around it: Print runs are done at night to make sure the product is delivered in the morning. That puts a hard deadline on the writers to submit stories before the product is “frozen” into a final edition. Writers and editors and advertisers need to march in lock-step to the cycle time of a big manufacturing operation.

There are 19 presses and 17 printing plants that print the two million copies of the U.S. edition of The Wall Street Journal. To make changes to the plant require large amounts of capital investment and that capital’s depreciation is an integral part of the financial balance of the company. So much so that one wit remarked that a newspaper is nothing more than an instrument that permits the depreciation of a printing plant.

Costs of manufacturing have been slightly offset by better technology and distributed printing but newsprint itself has soared in price so the dependence on physical product has made the economics worse over time.

That’s the cost side. But if you keep following the money from the revenue side, you realize that the situation is critical. In the US, a large part of the local paper’s revenue base was wiped out by Craig’s list. Classifieds are a fading memory. With respect to regular ads, the story is almost as bad. 26% of ad spend in 2009 was allocated to print, while only 12% of time spent consuming media was spent on it. In contrast, Internet use is at 28% of time where only 13% of ad dollars are allocated. 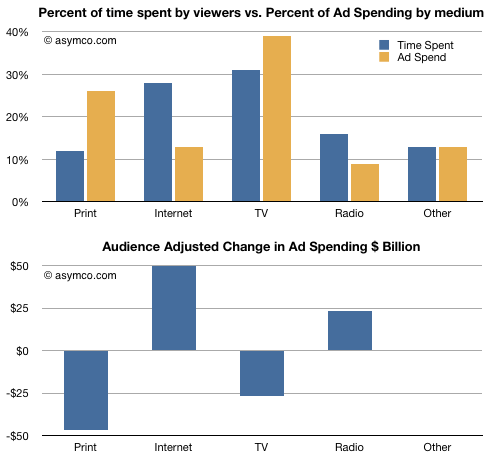 It’s inevitable that advertisers will shift their budgets to follow where the attention is going. Potentially that’s a $50 billion shift into Internet advertising. The number nearly matches the $47 billion loss from print.

This future is not far off. In fact, it’s already happening. in recent years the number of newspapers slated for closure, bankruptcy or severe cutbacks has risen—especially in the United States, where the industry has shed a fifth of its journalists since 2001.

Once the printing plant is taken out of the equation, the raison d’être of the package itself ends. For this reason, the newspaper product cannot survive on-line. Reading news is still very popular, but newspapers aren’t.

So will the iPad save this medium?

As in Citizen Publisher, I argue that for that to happen, the medium needs its Orson Welles. Furthermore, to have him emerge, the business must be architected as an integrated approach to solve a new job to be done.

The latest story from The Guardian suggests that Rupert Murdoch is working on just such an approach. In another interview Murdoch explained the project in more detail:

What is the biggest thing on your mind now?

…There are so many disruptive technologies coming all the time! [This in almost a whoop of excitement.] Pretty. Damn. Interesting! Just trying to stay ahead of the technology. I’m starting a paper in six weeks. A brand new paper. It will be a bit like the New York Post . But it will be national. Have that sort of humour and attitude like the Post . It will only be seen on tablets. It will only employ journalists – and maybe eight to 10 technicians.

What sort of circulation will you need?

What’s more, it’s suggested that an unreformed disruptor is mysteriously involved.  One can only speculate, but the hints of autonomy, dedicated (and incentivized) creative professionals involved in a new (not re-purposed) publication with a low-cost structure bodes well.

The medium may get its Orson Welles after all.