For a historical perspective, the following table shows year-on-year growth for products[1] and sales/earnings color coded with an arbitrary scoring range.

The major changes from the last quarter were the acceleration in software sales and the return to growth in iPod sales. iPod benefited from the continuing shift to iOS as the mix is now 50% touch in the portfolio.

Software growth reached a level not seen since 2008. It’s not clear to me yet  which products drove this increase.

Overall the growth is both wide and deep. I’m most impressed with the iPod as it was a surprise to hear such a high mix of touch.

The following chart shows the top and bottom lines plotted over time with color bands corresponding to the score system in the table above. 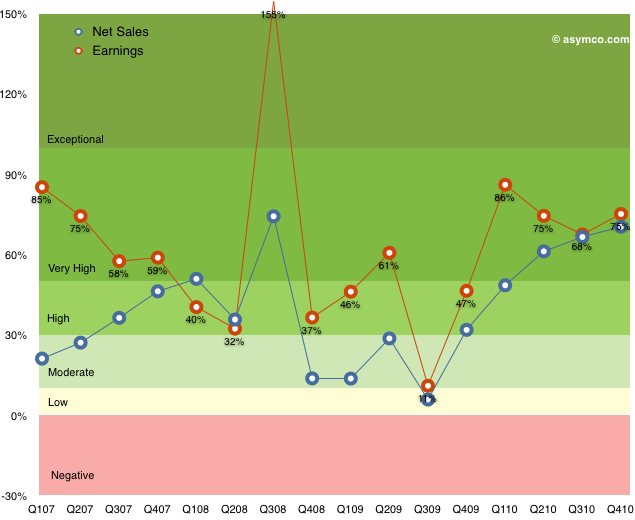 Note how earnings growth has been in the high or very high or exceptional range for all but one quarter over in the last four years[2].

Apple transcends the mythical “rule of large numbers”[3]. It’s not only a mega-cap, but the second largest company in the world by market cap. Not only has this enormously valuable asset just grown in intrinsic value creation by 75% but it has maintained a growth of 70% for the last five quarters.

If that weren’t enough, the average earnings growth has been 63% for the last sixteen quarters.