The smartphone market grew 73% in Q4. Here are the growth rates for vendors which regularly report smartphone sales: 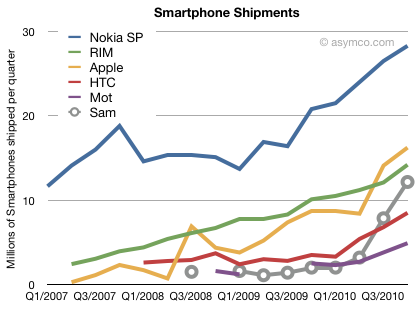 Samsung is not consistent in reporting smartphones and we don’t have year-ago data but the following chart can be used to get a hint.

Samsung had a very good year with 25.2 million smartphones sold. This is compared to 2009 when they probably sold less than 5 million. Their growth has meant they overtook both Motorola and HTC and are likely to overtake RIM this year.

Samsung owes its success mainly to adopting Android. As can be seen in the next chart, Samsung moved rapidly to shift its portfolio from non-smart to smart. This is quite a feat considering the starting point well below that of Nokia. 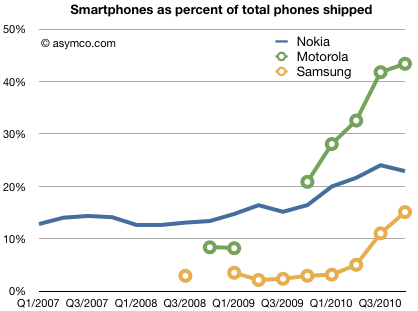 From 2% of total phones to 15% smartphone volumes in 18 months is astonishing.

Extrapolating for the missing data leads to an estimate of smartphone growth for Samsung of over 500%.