In a recent post I pointed out that Apple’s R&D was about 2.2% of sales in the last quarter. Bernstein took a look at the R&D for Nokia and presented a chart showing the difference between the mobile industry players in terms of total expenditure on R&D.

I took inspiration from that to plot the Devices R&D for both Nokia and Apple over the entire 2010 period. I also compared that with sales and computed the ratio between R&D and sales.

The result is shown in the chart on the left.

Bernstein goes on to argue that at least for Devices,

Nokia spent $3.9bn in R&D in 2010, almost 3x the average of its peers, 31% of the industry’s R&D total spending, for an output that we can qualify as visibly disappointing. 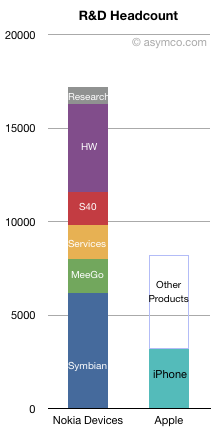 Applying a similar formula ($240k/employee[1]) to Apple’s estimated iPhone R&D (from Bernstein’s chart) yields a headcount of about 3,200 and a total Apple company R&D headcount of 8,200.

So Nokia employs about the same number of engineers[2] for its smartphone software platforms as Apple does for all its product lines[3].

In fact, Symbian alone may cost twice as much to develop than the iPhone (including the hardware).