Who is Winning the U.S. Smartphone Battle? | Nielsen Wire. 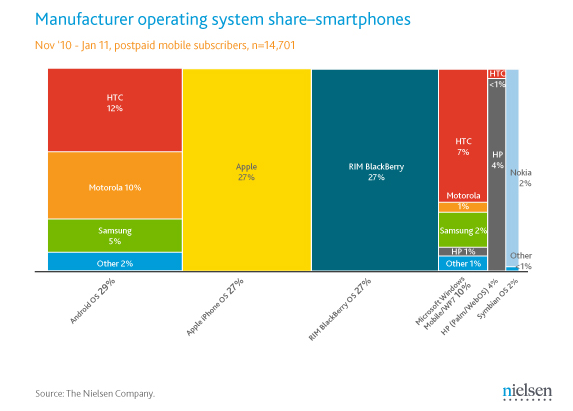 This is a great chart from Nielsen showing the split in manufacturer share by OS in US installed base. What I consider significant is how the modular software platforms Windows Mobile and Android worked out for the licensees.

Whereas in the case of Windows Mobile HTC took a significant, nearly dominant share, the Android ecosystem was more balanced between HTC and Motorola. However, HP and Motorola left the Microsoft camps, Motorola going exclusively for Android and HP buying Palm. That leaves Microsoft with HTC, Samsung and Other (mainly LG I presume).

The question of how Windows Phone will shape up vs. Windows Mobile and Android remains. Motorola has signaled they are not interested in WP7 for the time being and so it’s likely that they will stick with Android. Samsung is always hedging its bets so it will probably balance its portfolio. One could conceive of Nokia stepping into the US with significant WP volumes, but there are many hurdles on the way.

One can see the challenge individual modular vendors have to edge the overall volumes of the integrated vendors. As Nielsen points out:

Not only are the volumes higher, but so are the margins and hence profit share.