And a lot of folks in this tablet market are rushing in and they’re looking at this as the next PC. The hardware and the software are done by different companies. And they’re talking about speeds and feeds just like they did with PCs

I’m not above doing a feeds and speeds comparison. 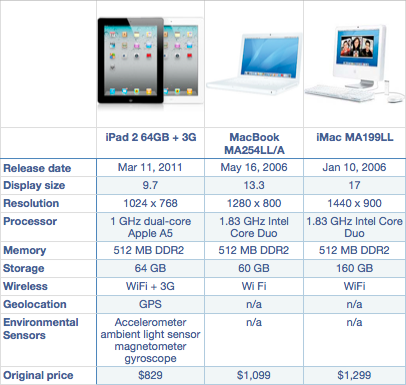 All the products above have dual core processors, 512 MB of memory. The iPad processor is a bit slower. The iPad also has a slightly smaller resolution screen than a MacBook from mid 2006. However, unlike the others, the iPad has cellular broadband connectivity, loads more sensors, and a battery that will last at least 5 times longer.

It’s also a lot cheaper and a lot smaller.

Although five years old, nobody would question that the MacBook or iMacs shown above are still computers. They still run the latest versions of OS X and are probably still in widespread use.

The new iPad is still not considered a computer by the majority of market analysts. One wonders how long this will go on. The specs of the iPad are just going to keep getting better…