It’s a great misfortune that we don’t have data about the future. It makes it hard to tell what’s going to happen.

It’s even harder because although sometimes we have data about the past, the past and the future don’t always look the same.

Clearly that’s what makes predictions about mobile computing platforms tricky. Nothing that has happened recently had been predicted by those who had tried to do so in the past.

The difficulty is compounded if trying to forecast in the long term like 4 or 5 years ahead. The tendency is to extrapolate what has been happening to date.

It’s tempting to project whatever trends one sees into the future. The problem is that some trends are more visible than others.

For example, let’s look at the following three forecasts (IDC, ABI Research and Ovum) projecting platforms for 2015 and 2016. Although there are some differences in magnitude of the entire market, there is a strong similarity between the forecasts and with the current trends[1]. 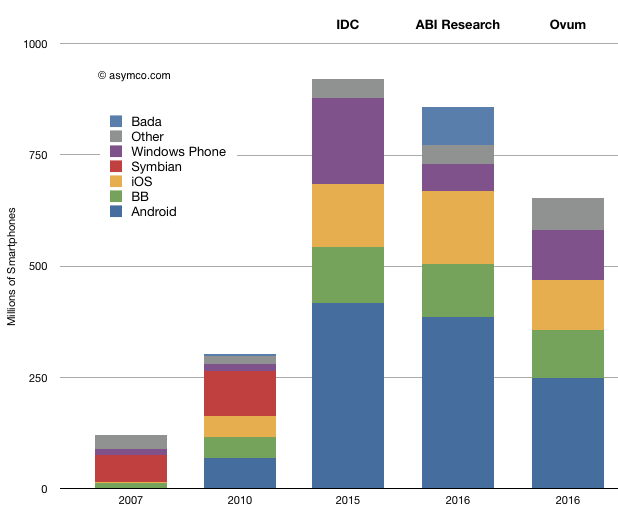 However, when comparing what was happening in 2007 with the market three years later[2] it’s clear that most of the change was from the entry of iOS and Android (and a large expansion in RIM as well.)

So how are we to be sure that there won’t be another entrant between now and 2016? I presume the argument is that the market is “too big” for a newcomer to make an impact. This argument is equivalent to saying that some organizations are “too big to fail”. That might has a right of its own.

However, the evidence has shown that no Goliath has ever stood for long against a suitably equipped David, especially in technology.

Given this knowledge, the pattern or trend that I see more than any other is that the future will be dramatically different than the past. This invalidates any forecast which assumes otherwise, including all those above.