In yesterday’s post about the “biggest mobile loser” I covered the exodus of users from non-smart devices in the US and EU5. I also said that what happens in those regions tends to happen in other regions with a time shift. In some regions it happens quicker but in most it happens more slowly.

But can we be sure that there isn’t vast non-smartphone growth in other regions? Well, no, we can’t be sure. At least not without access to reliable data.

But what we can track is the overall non-smart phone market and compare it to the smartphone market. Here are the growth rates of the two sub-markets: 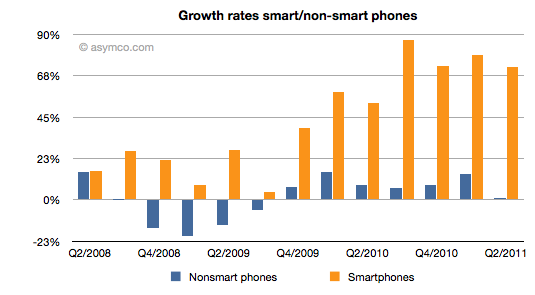 The difference is plain to see. We can also note that the non-smart market may be heading into a contraction–something noted by some analysts close to the market–but no real sign of that happening in smartphones.

Beside growth, we can also see actuals and the split of various vendors’ volumes in the market. 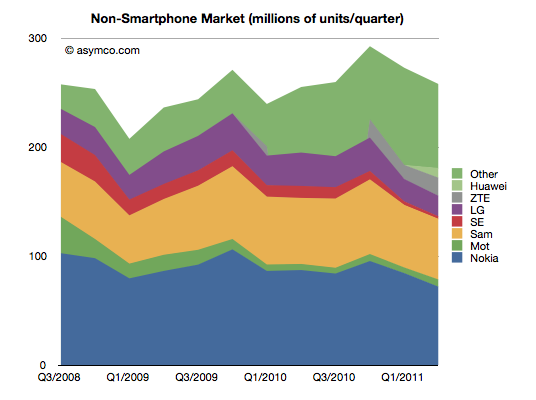 It’s also clear that the top line has not moved much in the last few years. Next, the shares of the vendors. 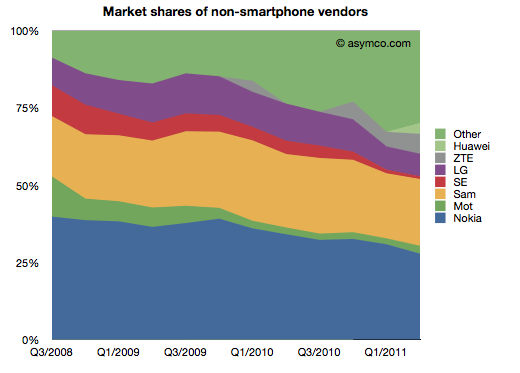 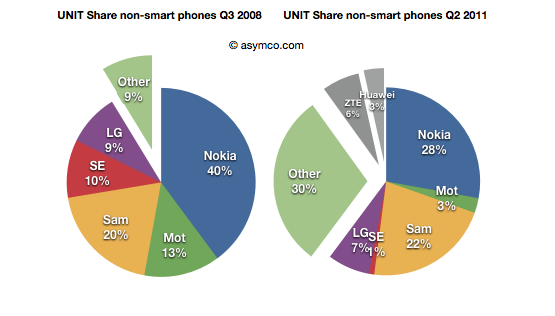 We can see that the growth story, if there is one, is coming from low-end entrants. In late 2008 the main brands had 90% share. They now have about 60% (in a flat market.) The growth is all from “Other”.

So the question for the incumbent vendors is extremely important: Facing them are low-end and smartphone entrants engaged in a pincer movement, with obvious success; can the old brands survive?

The answer, as always, depends on whether the competition is symmetric or not. Low end competitors are usually structured around low cost structures. High-end competitors are exploiting new markets and new business models. For an incumbent to survive and fight on both fronts they’d have to adopt both of these models for themselves, simultaneously and quickly.

We can see that Sony-Ericsson and Motorola (Google) have thrown in the towel on the low end. The question of dual-front strategy is mainly relevant only for Nokia, Samsung and LG. LG is on the ropes and may actually be ready to exit the market so that really means Nokia and Samsung. Nokia has signaled continuing interest in the non-smart market (citing “the next billion users”). Samsung also seems to be hanging in there. Can they do it?

I cannot stress how difficult this is or how rarely it has been achieved. The two approaches are if not opposites then at least orthogonal. It’s like Mission Impossible. You can’t be a low cost global vendor while investing in R&D for differentiated platform-based devices. These are shaping up to be businesses requiring completely different skill sets. Few have the ability to host these skills inside one company. I can think only of one example.