In the recent event discussing Apple’s cash plans, Tim Cook stated that the primary objective of the stock repurchase program is to reduce dilution from the ongoing distribution of shares to Apple’s employees and executives as part of their future compensation.

The amount allocated to this is $10 billion over a three year period.

This sets up an interesting analysis. The company is saying that they will continue to pay employees with newly issued shares (in addition to wages) but that a portion of those shares will be purchased back from the market to reduce dilution.

To understand the impact, it would make sense to look back and observe how many shares were issued in this way historically and consider how much $10 billion buys.

The following chart shows the quarterly change in shares outstanding. 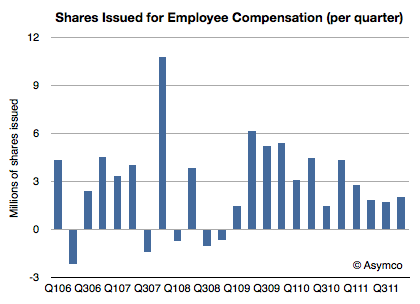 The absolute number of shares outstanding grew from 874.2 million in Q4 2005 to 941.6 million last quarter. That’s a net increase of 67 million shares over a six year period. The rate of growth has been accelerating. Over the last three years  40 million shares were issued.

These issuances have an effect for shareholders. They “dilute” the total shares outstanding and thus spread the earnings more thinly. You can get an instant feel for this as the EPS figure must be re-computed each quarter with a different denominator. This is a real cost.

Here is how to compute it. Last quarter there were two million shares issued at a “cost” of about $400/share. That means that shareholders lost the equivalent of $800 million (2 million x $400/share average price in Q4) of value.

Now what Apple has just promised is that they would buy back the equivalent of $833 million per quarter ($10 billion/(3 years x 4 quarters/yr)) for the next three years. Note how close this figure is to the one calculated above.

What we can also obtain is a ratio between stock-based compensation and wage-based compensation. Since we can estimate the total Apple employee wages at $3.2 billion per quarter (average R&D and SG&A over the last year), the stock compensation of $800 million amounts to a 25% bonus.

In other words, on average an employee is likely to get compensation of $X in wages and 0.25X in stock grants.

Therefore Apple’s $10 billion dollar pledge is not only a commitment to shareholders that the dilution will be eliminated. It’s also a signal to employees: for at least three years, Apple will continue to offer shares as compensation and will do so in a ratio of 1:4 of wages.