Nielsen has already noted that more than half of US consumers have smartphones. comScore’s data seems to point to that threshold being crossed sometime this year.

If that point is crossed then it would mark the smartphone as one of the most rapidly adopted consumer technologies of all time. I plotted the time it took for a set of technologies to reach 50% penetration of US households. 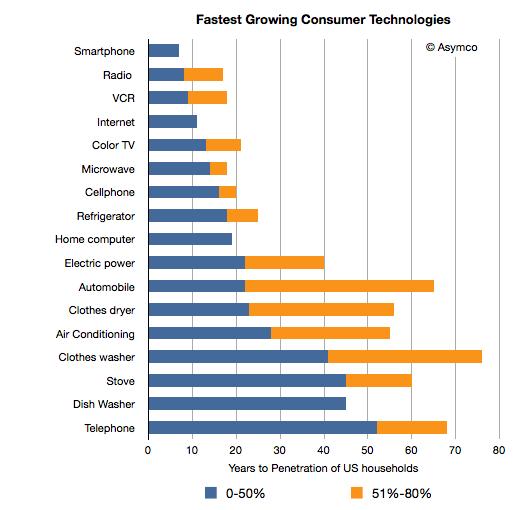 I also showed the time it took for some of the technologies to reach 80% penetration.

The obvious question is how long will it take for smartphones to reach saturation in the US. Saturation level would be above 80% for individuals but closer to 100% for households. A conservative estimate would be another seven years. An aggressive estimate would be five years. That implies that between 2017 and 2019 smartphones will be the only mobile phones Americans will use. That would be equivalent to a user population of about 300 million.

There are significant technical and marketing challenges for reaching the “second half” of the market, but, as in all the other technologies listed above the incentives are in place to overcome these challenges. What’s most remarkable about smartphones is the speed with which obstacles are overcome. For such a complex and inter-dependent technology, the speed of adoption and value creation is unprecedented.

The value network creation rate is also staggering. The App Industry went from inception to billion dollar valuations in a matter of three years. Entirely new business models and experiences are being created almost daily. What used to be a glacial process of innovation diffusion can now be observed in near real-time.