We don’t have the total number of Samsung shipments, however estimates exist. They range between 41 and 44 million smartphones and 44 and 47 million feature phones. The low end of that range would imply Samsung shipped 85 million phones.

This would be the first quarter that Samsung beat Nokia in total phone shipments. It had already overtaken Nokia in sales volume and profitability last year but this is the most cited metric of market performance: being the biggest in volume. Here is the tale of the shipments: 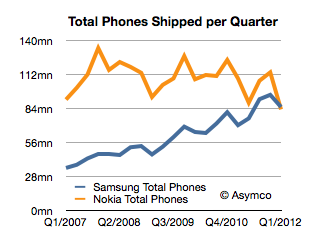 How did this happen?

The answer should become visible when we look at at another set of data. If we split the smartphones from feature phones the charts look like this:

Looking at product mix, Samsung growth is shown to be almost entirely due to smartphones while Nokia’s stagnant growth seems to be a failure to have any smartphone traction.

It’s even more clear when showing the above mixes of devices as percents of total.

As a percent of total, Nokia has shrunk its smartphone business from a peak of 24% in Q3 2010 to 14% last quarter. In the same time frame Samsung’s smartphone share of portfolio has exploded from 10% to nearly 50%.

Note that both companies have seen non-smart device volumes contracting. Samsung’s level is approximately the same as it had in late 2007 and Nokia’s is lower than at any point in the last six years (perhaps longer).

So the answer to the question of how Samsung beat Nokia is told in the following chart:

Samsung was able to convert its portfolio to smartphones while Nokia failed to do so. This is the sort of transition that can only come about from an explicit strategic intention on the part of management. Market demand can steer you in any number of directions, but a vision of a future should provide the compass for making the big bets.

The bet Nokia made many years ago was that there would be a continuing, substantial business in the “low end”. And low end meant feature phones. This strategy was still in evidence last year under the moniker “the next billion” users. The decisions were not driven by whether the products would be hired for different jobs, but that they would hit different price points. In other words, segmentation of customers by their ability to pay for devices rather than categorization of the jobs they hired mobile devices to do.

Perhaps Samsung was no wiser, but they were more pragmatic. Being non-dogmatic meant being flexible. They ran with off-the-shelf technologies and managed a transition to smart devices faster than anyone expected. It may not be a perfect strategy but it beat a bad strategy.