Sony Ericsson is no more. The company remains but the brand is gone. Now the phones it makes will be sold under the Sony name. Unfortunately, that means we no longer get reports from the company on its volumes, profitability and sales. The units will be part of “Other” from now on.

That vendor’s data disappears as did HTC’s and Samsung’s earlier reporting. Bit by bit, vendors are withdrawing information. RIM stopped reporting its average selling prices some time ago, Motorola may disappear completely and they already stopped reporting tablet sales.

This makes the picture of the market fuzzier each quarter. We have to rely more and more on analysts who publish estimates. I try to pick from the available data the best assumptions but the errors are undoubtedly increasing. Here are the charts showing unit volumes in terms of absolute, share and ranking. 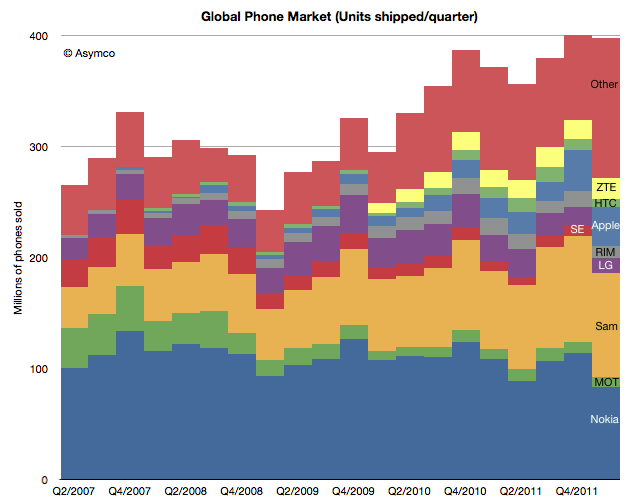 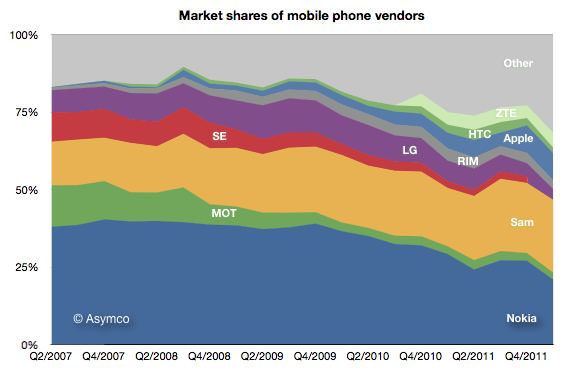 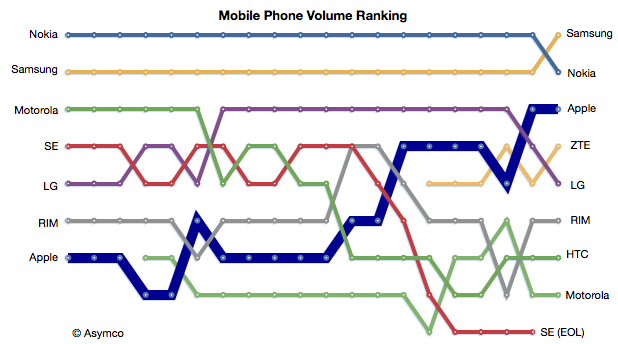 As I wrote previously, Samsung has overtaken Nokia which lost the top spot in unit shipment ranking, a spot it held for 14 years.

Of all the participants, only three brands enjoyed growth this last quarter: Apple, Samsung and ZTE. ZTE, like Apple, is noteworthy for its late entry. The others are in a mess: Motorola -4%, Nokia -24%, RIM -26%, HTC -29%, LG -44% in terms of unit growth y/y. This, while the market managed a modest gain.

It still find it fascinating that such a large market, selling 400 million units every quarter can exhibit such rapid change in participant ranking.