Last year we sold … 2.8 million Apple TVs. This year, just in the first six months of our year we’ve sold 2.7.

I note the “our” in “our year”. This implies fiscal year (that and the fact that he spoke in the past tense before six months had passed in the calendar year.)

Given the public information we have so far, it’s now possible to estimate with some confidence the sales history of Apple TV. The following chart is my estimate. It includes all the known data so far with some interpolations to fill in the gaps. 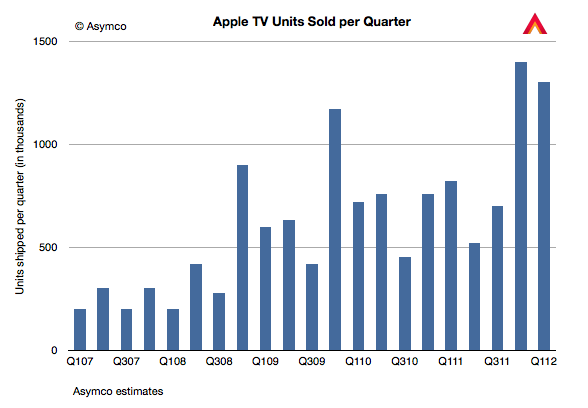 Assuming average revenues per device of $100, we can get an estimate of about $344 million in Apple TV hardware revenues for calendar 2011. This is not a large amount relative to Apple’s other lines of business. It is, for example, only 14% of the overall Peripherals revenues and only 5% of the iPod.

The complete picture therefore has to include an assessment of the content attach rates and the agency fees that Apple gets for that content.

Let’s assume that each Apple TV is used to generate $10/month in content sales. This is not a lot. It’s equivalent to 5 TV shows or one movie purchased or two movie rentals per month. The model I have shows that the installed base of Apple TVs was about 10 million by the end of 2011. That means that the run rate is $1.2 billion in content sales for the Apple TVs in use.

Now Apple does not book all that. They book only about 30% as revenues as their agency fee. That means that Apple TV could be generating revenues at a run rate of $360 million (to Apple.)

If we add that to the $344 million in hardware revenues we get about $704 million for 2011. This is still not a huge business. It is about equal to the revenue from iPad Smart Covers[1]

Looking forward, if Apple TV units sell at double the rate of last year and we increase the footprint accordingly, we could see a revenue rate of $1.2 billion for 2012.

Now this is not a high margin business. The margin on the content may be less than 50%–depending on transaction costs and hosting/traffic fees. The margin on the hardware is also likely to be below 40%. So the business is not wildly profitable. But it probably is profitable. Which means it makes sense to keep it running while waiting for other pieces to fall into place.

As Tim Cook repeated, they are very interested in this space. However, any discussion of the future must include an analysis of the business model and the sustainability in terms of profit that keeps long term development focused on getting the product to be good enough for the right jobs to be done.

What we should think about however is this “polar opposite” business model. Apple is running this as a “hobby” or as an internal experiment. Sales are (relatively) tiny but it generates some profit. Volumes are small but they are growing. It’s taking a heck of a long time. It’s asymmetric to the prevailing model the company relies upon. It’s beneath contempt from all observers. Sounds familiar?