The history of personal computing has come to be defined as the history of Microsoft. At least since 1981 Microsoft’s operating systems have been the consistent market share leaders, and by a very large margin. That is about to change. This year Android will be on more devices sold than Windows. iOS is also set to also overtake Windows next year. The following chart illustrates the wave of mobile platforms that has emerged, and in spite of some notable failures, is overtaking traditional computing. 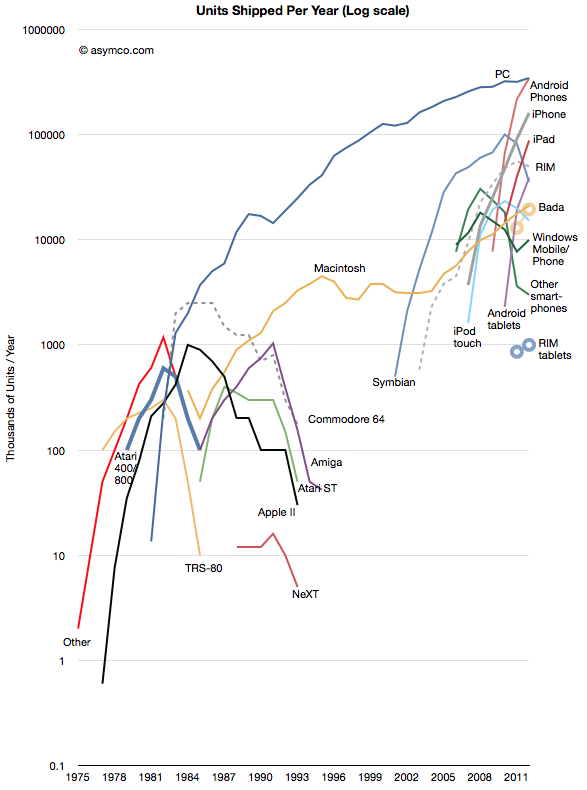 Of course we should remember that PC themselves overtook entrenched predecessors like minicomputers and mainframes which themselves overtook business computing systems based on adding machines, typewriters and slide rules. This is the cycle of disruption and there is nothing new about it.

However, it always seems to take people by surprise. This is because it happens in unforeseen ways and at unpredictable rates. And so it is that we are surprised by Microsoft’s seeming abandonment of a business model that has sustained it for three decades.

Yesterday’s reveal of Surface, Microsoft’s first personal computer, was a watershed event in the evolution of value chains around computing. In a famous slide Clay Christensen illustrated (in 2004) the value chain evolution in computing from the 1960s to 2000. 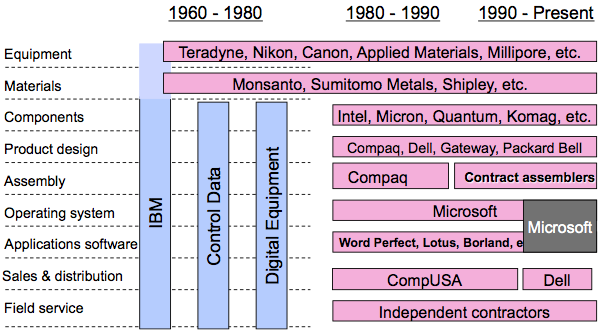 Now we see Microsoft following in the same footsteps. First applications came early then stores, then service, and now product design. Google is also tracking closely behind as well with its acquisition of Motorola, the results of which have yet to be revealed.

And so we can see value chains evolving in real time before our very eyes. They have always evolved but in technology industries they evolve far more rapidly and will continue to accelerate.

Whether Microsoft or Google will be successful in their integration efforts remains to be seen. The challenges are immense as the value of the existing chains are enormous and the bonds that tie the company to them very strong. Breaking these ties will seem like value destruction and corporate antibodies will be set loose to kill the transitions. HP, RIM, Nokia and Dell are vivid examples of what happens when the response mechanisms have their way.