A year ago I noted that Apple could buy most of the mobile phone industry with cash on hand (excluding Samsung’s operations).

Since then Apple’s cash has grown significantly and the value of all phone vendors except Samsung has gone down significantly. The following chart shows the year ago and present day estimated market value of the industry participants. 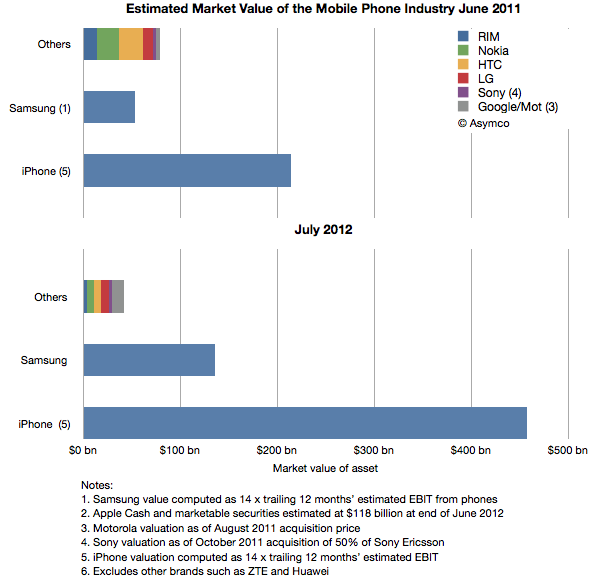 Phone brands other than Samsung and iPhone have seen a reduction in market value of a combined 47%. That’s actually being quite generous since I’m valuing Motorola and Sony’s businesses at their acquisition prices. The operations of both those companies have continued to stagnate.

Based on the same multiple of estimated earnings Samsung grew its value by 157% and iPhone by 114% (note this excludes iPad).

In absolute terms the iPhone franchise created $244 billion in value while Samsung created $83 billion. The others destroyed $37 billion.

The good news is that the industry has had net value creation–always a healthy sign that innovation is being valued and absorbed.

The bad news is that there is vast income inequality. The rich are getting richer and the poor are getting destitute. This is an unhealthy sign. The concentration of power and wealth may indicate a peaking of experimentation and discovery of new opportunities.

Also noteworthy is that almost all the value from the Android ecosystem is concentrated in Samsung. I did not include Google in this analysis since its mobile is so small as to be not visible in its accounting. A separate analysis of Android economics shows that Google’s benefit from the platform is modest. In contrast, Samsung, and Samsung alone, is benefitting greatly. It could even be said that today Samsung is the only Android profit engine.