It takes money to make money. That’s a cliché. But it’s also true. The interesting question is how much can be gained from how little.

In previous articles I explained how Apple’s expenditures of capital for equipment used in manufacturing affects their output of products. The relationship between capital in and product out should stand to reason.

The more surprising aspect of that analysis is that we get to know in advance how much Apple spends (since they tell us their budget a year before it’s spent.) and therefore it becomes possible to get a rough idea of how much they will produce. And since demand has generally been higher than supply we can get an estimate of how much Apple will sell.

The only missing piece to this logic chain is to estimate how much will shareholders benefit from the capital expenditure. I’ll try to establish the relationship through a build-out of graphs. 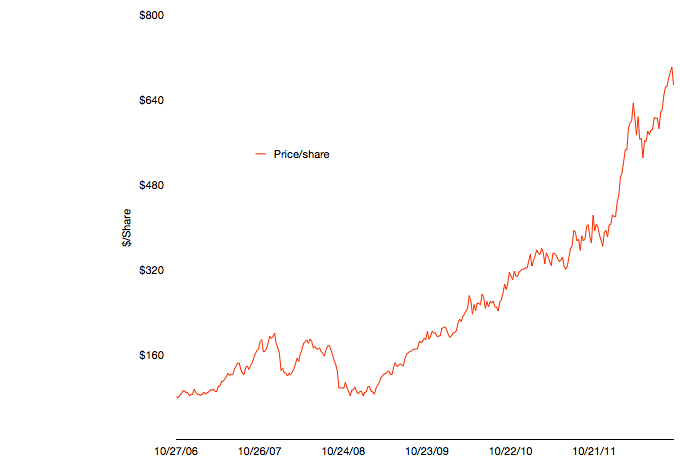 The time frame stretches back six fiscal years. The time span includes some dramatic periods including the financial crisis and the launch of the iPhone and iPad.

To illustrate the effect of the iPhone and iPad on this share price appreciation, I’ve overlaid a quarterly resolution graph showing revenues over the same time period with each product line shown separately. 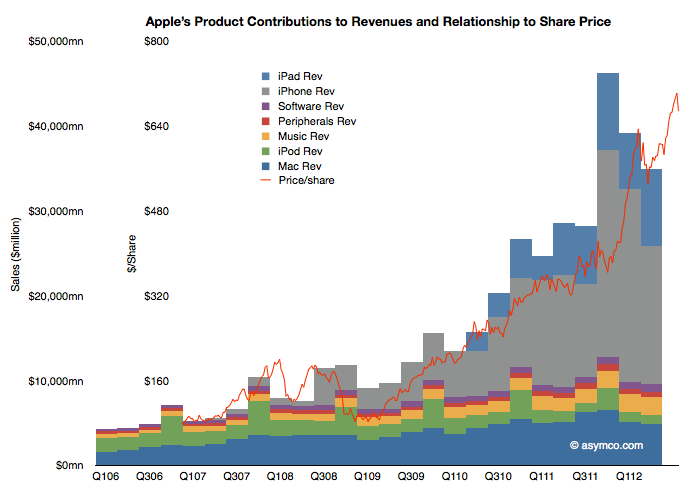 Note that I’ve indexed the vertical scale to match approximately the highest peaks of both graphs. The two axes scales are shown separately on the left.

END_OF_DOCUMENT_TOKEN_TO_BE_REPLACED

For years, those who’ve wanted to teach themselves programming have been caught between the trusted content found in books and the ease of use with online materials. Now, O’Reilly Media and Inkling have teamed up to reimagine the world’s most trusted technological resources for iPad, iPhone, and the web.

From embedded coding sandboxes to notes with web links, syntax highlighting, and more, books in the Animal series, Missing Manual series, and others are amplified with Inkling-only features not found in any other e-book version. Copy-and-paste bits of code as you go on your laptop, or drill down into the logic behind the syntax when reading on your iPad or iPhone.

Budding developers and tech enthusiasts alike now have some of the world’s best tech resources right at their fingertips. Watch a video that shows how it all works, and shop for books.

Sponsorship by The Syndicate