comScore reports that US smartphone penetration has decisively crossed over 50% in August. This should not come as a surprise as the penetration rate has been very linear. 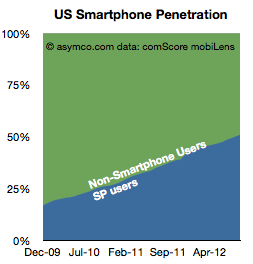 Now that we’ve crossed this milestone, the thing to watch is the conversion rate from smartphone non-consumption to smartphone consumption.

The reason is that we don’t know what “saturation” means in smartphones. We can assume it’s at least 80% as about 80% of new phones being purchased are smartphones. What we don’t know is how much above 80% it can be. It could  be 100% if feature phones simply stop being made but we can’t be sure if there will be latent demand and how long this will last (similar to the market for black-and-white TVs after Color became commonplace).

To help keep an eye on this measure, the following graph shows the rate at which non-smart to smart conversion is happening.

It measures the addition of new (to smart) subs each week in a particular measurement period (three months ending the month shown on the x-axis). There is also a 3 period moving average shown as a line. Keep in mind that this shows net new users and therefore excludes smartphone switchers. It’s a good measure of how rapidly non-consumers are being converted to consumers.

The data shows that there are as many first time smartphone adoptions in late 2012 as there were in late 2010. Or, the new-to-smart users are joining ecosystems just as quickly when penetration is 50% as when it was 20%. An encouraging situation when considering the opportunity space above 50%. The “S-curve” has not reached an inflection point.

If you’re thinking about growth, so far so good. There is however one surprise in the data.

All the growth in the last 24 months (between 2010 and present) was due to Android and iOS. Android added 50 million and iOS added 26 million in the last 24 months. The net smartphone user additions were about 60 million (RIM lost about 12 million, Windows lost 1.5 million and others lost 2.6 million). Android therefore has gained twice as many users as iOS has in this two-year period. Put another way, Android captured 70% of the growth and iOS captured 30% of the growth.

The evidence also shows itself in the trajectory of platform market shares of installed base. 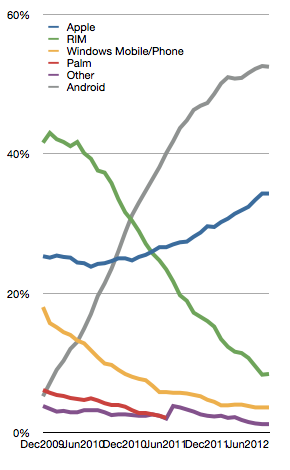 In the last six months, Android share growth is slowing while iOS is still gaining.

If this trend continues then the next 50% may not behave as one might expect (namely that late adopters would take the low-cost commodity offering accelerating Android adoption.) Late adopters may, in fact, be choosier than early adopters. And it’s not at the cost of overall growth. Late adopters are still converting at the same rate of the early adopters.

Therefore, paradoxically, the late market shows that the prospect for iOS growth seems strong. Furthermore, as we do reach saturation, perhaps in another three years, the secular growth may end in the US but the loyalty of iOS usage may give iOS another advantage in a market where growth is determined by “platform churn”

The US is the crucible of the phone market in many ways so what happens in the US may be a harbinger for what happens world-wide.