The latest yearly report from Apple includes, as it has in the past, the forecast of Capital Expenditures. I’ve been tracking this data as an indicator of both strategic intent and potential forecasting tool for iOS device production.

Before exploring Apple’s own forecast, we should look at how they met expectations for fiscal 2012.

In October 2011 the company forecast was as follows:

There are two points that need to be highlighted:

So it’s important to note that the company spent a great deal more (one third more) than expected and paid for some of the acquisitions through uncharacteristic or unorthodox means.

The historic budgeting for Machinery & Equipment (+Land & Buildings) is shown in the following graph: 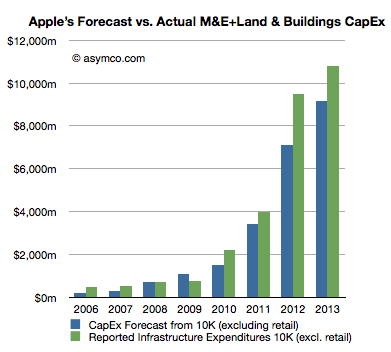 The percent over/under budget (percent difference between green and blue bars above) is shown below: 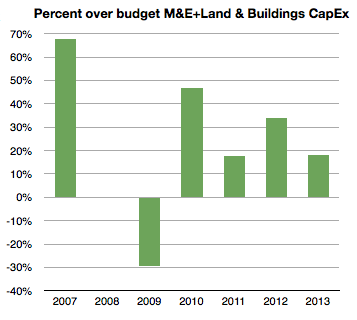 When seen in this historic context, the increase of 2012 is even more dramatic. Apple overspent in 2012 more than it spent overall two years earlier. 2012 spending on M&E (and Land) was up 138% sequentially and nearly seven times the level of three years ago.

With this splurge in mind it’s necessary to think about that second noteworthy point above. There is evidence that at least some of the $2.3 billion over-budget was unanticipated and came late in the year. We saw the surge in spending in FQ4 from the gross asset value change data. The question is what was it spent on and why did it not go through the cash flow statement?

Circumstantial[2] evidence points to the asset being production equipment (or even a whole plant) previously owned by Sharp. Sharp is a key supplier of screens to Apple but is also in financial distress. Sharp has also been the object of an intended investment by Foxconn [Hon Hai]. That deal fell through as Sharp’s finances deteriorated. My guess is that these attempts to shore up Sharp are directed by Apple to ensure both continuity of supply and a balanced supplier base (offsetting Samsung, another supplier.) If Sharp were to enter into some form of bankruptcy, the key plant(s) used in producing screens for Apple might be “up for grabs” by creditors and they might be taken off-line, jeopardizing Apple’s production capacity, irrespective of contractual obligations. I believe that Apple’s late and unprecedented expenditure was to secure this asset. I further believe that the financing for this deal was done through a swap of “pre-orders”. Stepping even further into the hypothesis, I believe Apple arranged to move a Sharp screen production line onto its books and “paid” for it through a pre-payment of components. This being a pre-payment it would be in the form of an “off balance sheet” commitment. Apple reported that “As of September 29, 2012, the Company had outstanding off-balance sheet third-party manufacturing commitments and component purchase commitments of $21.1 billion” [my emphasis]. This is a significant increase from earlier years and allows for a huge “slush fund” to cover asset swaps.

If we take the timing of this expenditure into consideration, I consider it reasonable to assume that 2013 spending is lower by this amount. In other words, I think that about $2 billion, including the Sharp plant, may have been “brought forward” by a few months from 2013. If the company had spent more on schedule and on budget (i.e. with an over-spend of 15% rather than 34%) it would have spent about $8.2 billion. Therefore, as next year’s forecast is for $9.15 billion and as I would also expect an over-spend of 18% or $10.8 billion total, adding the brought-forward $2 billion would imply sequential growth from $8.2 to $12.8 or 56%.

So, recapping the CapEx story, the company over-spent far more in 2012 than anticipated. It did so late in the year. It did it while a supplier was in distress and another’s supplier’s efforts in rescue failed. Furthermore, it indicated a modest and thus uncharacteristic increase in the next year’s CapEx budget. My take is that the trajectory of investment is not being altered dramatically but it’s had an adjustment in timing, a kink in the line. The overall story remains that Apple is still injecting vast and growing amounts of capital into production and placing those assets on its own balance sheet.