During the last 12 months 31 million American phone users abandoned the use of feature phones. During the last 24 months over 60 million switched. Over 550k users are switching every week and this rate of switching has not changed much since late 2009.

Some of this switching has to do with demand for smartphone services but some of it is also due to a decreasing supply of non-smart phones. The shelf space being allocated to smartphones is nearing 100%. My single sampling of a Wal-Mart store shows the following data: 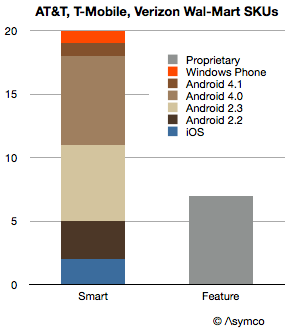 Looking at individual carriers, AT&T ranged one feature phone and 7 smart SKUs. Verizon’s ratio was 2:8 and T-Mobile’s was 4:5.

T-Mobile has been lagging in smartphone adoption and as they transition in 2013 it’s possible that the AT&T ratio of 12% shelf space dedicated to feature phones will become the norm for the US. And as the US goes, the world will follow.

With shrinking shelf space comes an accelerated decline in the product category. It may not come in 2013, and perhaps not by 2014 but it’s quite possible that by 2015 the last feature phone will make its appearance in the US.