The following tables show the unadjusted and adjusted growth rates. The adjustments apply to the bottom table and the columns highlighted.

As in previous scorecards, I used the following color scheme to “grade” the performance. 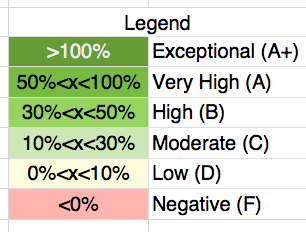 The adjustment brings growth in sales to a respectable 27%, well above the 18% unadjusted level. In fact, using the color map grading system four lines increase their rating from “Moderate” to “High” growth: iPhone, iPad, iTunes, Accessories all move from the 20’s to 30’s  percent growth.

The bottom line moves from 0% to 8% growth but it’s still low relative to historic performance. That had to do with margins; more about that later.

The graphs showing Revenue and Earnings growth with and without adjustments are shown below:

Note that iPad, iPhone, Accessories and iTunes/Software are based on re-stated figures.

Note also that the adjusted 2011 growth rates do not change dramatically with only iPad changing from Exceptional to Very High.