To anyone who has visited the current “campus”, it’s obvious that Apple has outgrown it some time ago. It’s also obvious given the increase in headcount and operational expenses over time as can be seen below: 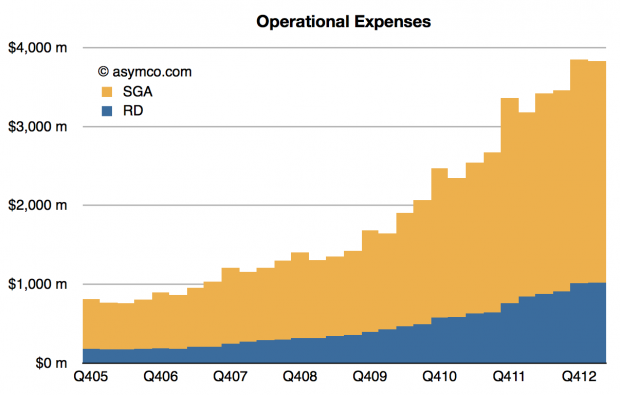 One can understand why, from a practical point of view, they want to consolidate what amounts to at least twice as many people back into one place.

But there is also a more subtle reason and it has to do to a fundamental distinction: Apple is a functional organization. Unlike almost every other large company it’s not organized in “divisions” which have responsibility for “a business” in the sense of profit or loss. At Apple most people or teams are assigned a function like “design”, “engineering”, “sales” etc. When a product is being built, they are assigned to that effort. When the product is complete, they go to another product.

This is not a matter of hypothesis. Not only have we heard rumors of how one product was delayed (e.g. OS X) because the teams were busy finishing another (iOS), but Adam Lashinsky’s work (sanctioned by Apple as it was) revealed the structure almost two years ago.

This structure may seem obvious to those working in small companies, but it’s completely unheard of in large companies. The nearest comparison to this structure is a military organization. There you have Infantry, Armor, Aviation etc. These groups are assigned (in a combined fashion) to a particular effort or battle and then go back to the barracks when done.

Another example is the way movies are made. Disney famously built his company around the same principle.

Seen from this perspective, the architecture of their proposed campus makes perfect sense. If it was a divisional structure then each division could live in its own building or campus. In fact, each division would not have much to talk about to any other division. But as a functional organization Apple needs to move people quickly between projects. It needs to re-configure itself frequently. Being in the same building means they can do this much more efficiently.

This is why there needs to be one building and this is why the shape chosen is probably optimal: each point within can be reached with minimal routing. The fact that it’s aesthetically pleasing is a coincidence.

Or perhaps not. Some say that in beauty there is truth. At least to me, the design looks to be pure logic.