iTunes (including software and services) revenues in Q1 topped $4 billion and were 30% higher than (re-stated) 2012 Q1 revenues. Accompanying this revenue figure were additional data points from the company:

This data allows for a few inferences:

Note that there is a difference between the amounts transacted through the store and what the company reports. The difference is shown in the following graph

To mark it’s 10th year, I wrote a segment for Billboard Magazine describing what iTunes has become. I suppose it’s easy to become numb to these numbers, but there is perhaps one way to look at iTunes that is still compelling:

Selling $20 billion a year would put iTunes in the top 20 US retailers and top 50 Global retailers. 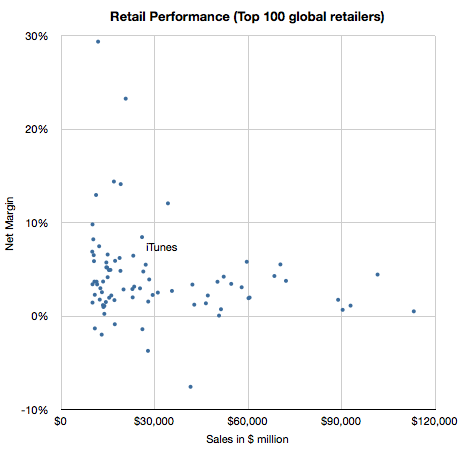