Bill, I think the smartphone market has always been competitive. [Only] the names have been changed.

Indeed, over the years, the companies considered Apple’s primary competitor have been many.

In years gone by in the phone market there were RIM and Nokia and Palm and HTC. In the iPod era there was Creative and Sony and innumerable others long forgotten (not to mention the tyranny of DRM).

Even today we struggle to decide whether Apple competes with Google first or Samsung. Or perhaps with the iPad it’s with Amazon or  Microsoft. Or maybe iTunes is threatened by Netflix or Spotify. The Mac surely competes with HP and Dell and Toshiba. What about iCloud? Clearly it’s Dropbox or Google Drive. iWork? Both Office and Google Docs.

Doing a competitive analysis for Apple is then mostly a struggle of whom to compare it to. So forgive me that I only track the few challengers shown below. 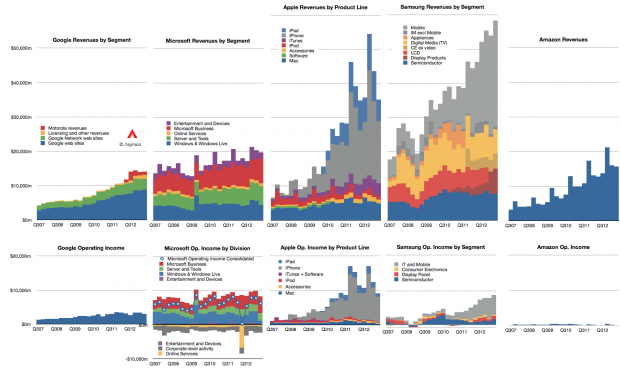 Note also that these companies all may compete with Apple to some degree but they may not compete with each other. Competition, it seems, is not transitive.

There isn’t much that I can observe in the data that hasn’t already been observed. Google shows steady but not spectacular growth in revenues with decreasing margins. Microsoft shows even more modest growth in revenues with flat earnings. Apple growth is moderating from near vertical while earnings pause. Samsung has great growth but there is a similar set of doubts about its sustainability and finally, Amazon continues to grow the top line by 20% and  has nothing to show for it.

Operating margins have mostly fallen with the exception of Samsung whose increasing reliance on smartphones has led to a modest increase, though not nearly to the level of the others. (Amazon, lacking in profits, cannot be compared.) 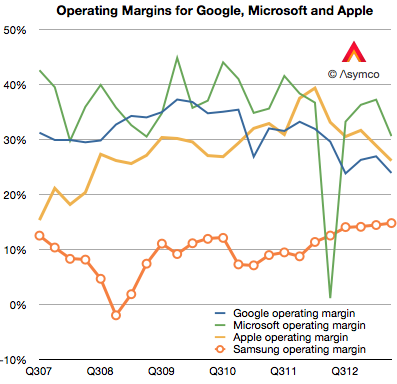 In summary there is little change to report.

Except that it’s been reported that in the last quarter Samsung managed to “dethrone” Apple from the phone operating profit crown. This is a matter of estimates and for that we need to understand clearly the assumptions.

I estimate that this is not the case. That indeed Apple remains most profitable phone maker by a wide margin.

To estimate operating margins you need to estimate gross margin and the allocation of operating expenses (SG&A and R&D) to a particular “division” or product line. The problem is that Apple does not operate as a divisional organization so its marketing and R&D budgets (i.e. people) are not assigned permanently. You have to move them around based on whatever is being worked on at any given time.

What’s more, we need to account for the huge SG&A costs associated with iTunes and Retail. They both consume vast resources which cannot be allocated directly to any product. There are 41,000 people working in retail.  Also, some of the expenses for iTunes are overhead and cannot be considered cost of sales. That’s also SG&A. Then there’s corp research and design (Mansfield and Ive), which are not allocated to any particular product. When you slice out these costs, there is very little to apply to iPhone, etc.

So if (and it’s a big, sanctimonious if) you want to cast iPhone out as a separate business unit, it would be wildly profitable. There is a huge gross margin of 46% (this assumes a cost per unit of $316) and only another 5% of sales spent on engineering and marketing leaves a 41% operating margin or $7.4 billion. (Why only 5%? Because there’s only 10.8% to allocate and after taking out iTunes, Retail you’re really only left with 4.49% for SG&A and 3.3% for R&D or 7.79% so 5% is about two thirds of the operating budget).

If you take all of Samsung’s IM division which is PCs, Tablets and phones their operating profit was only $5.6 billion.

You can see the difference in the grey areas of operating profit in the first graph above.

Bear in mind that this is still an artificial comparison. The split of profit between product groups is not only an estimate by the analyst, it would be an estimate for Apple itself since it has only one P/L.