In the Innovator’s Curse I reflected on the fact that a serial innovator cannot be efficiently financed or even rewarded for having figured out how to repeatably create. If anything, a serial innovator has to suffer a discount to peers who do not habitually (or ever) innovate. The innovation process is the proverbial goose that lays the golden eggs but is destined to perish due to the lack of faith in its existence.

So how can I back this up?

To start, this is partially evidenced in this graph of Apple’s price to earnings ratio since 2006 vs. the S&P 500’s. The S&P reflects the 500 largest companies in the US and is thus a proxy for the “average” company. 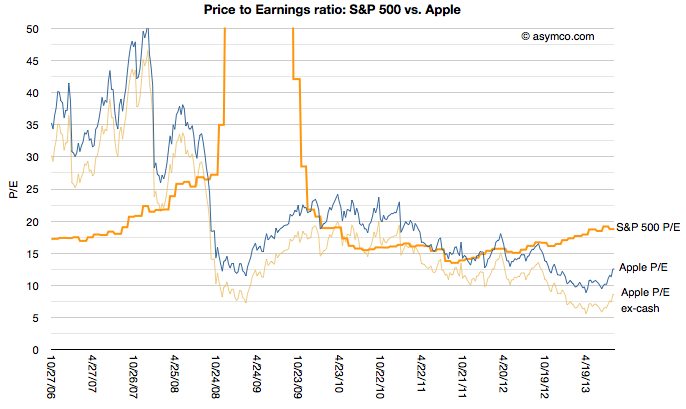 The graph shows that during the period of time when iPhone and iPad changed computing and telecommunications, Apple was mostly held in contempt: the profits it was generating were not considered of “sufficient quality” relative to an average company. Since markets look forward, not backward (one assumes), the vote cast is decidedly that success cannot be repeated. Put another way: you can trust that a soft drink maker like Coca Cola (P/E of 19) or a utility like ConEd (P/E of 18) will continue in the manner we’ve seen them perform in the last year more than Apple (P/E of 12) will.

I can offer yet another way to consider this curse. Apple’s iOS business is designed to capture profits through the sale of hardware. That hardware is manufactured through a process where, while not being the manufacturer, Apple purchases tooling in a capital-intesive strategy to control the means of production.  I’ve discussed this at length before.

But Apple’s business is more complex than just enabling manufacturing. Tooling allows for production and production allows for supply but supply is nothing without demand. And demand of the product is driven by investments in software and services and design and marketing and countless details.

In other words, for Apple’s modus operandi, if anything should correlate with value it’s opex, not capex. It’s the investment in the people Apple employs not in the tools it buys.

And yet consider this graph: 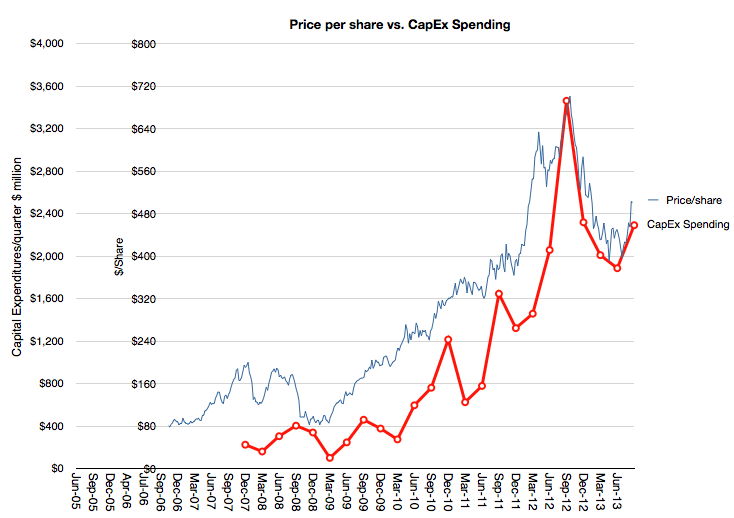 It shows how the market (though its pricing of Apple shares) values the company overlaid with a Apple’s spending on capital equipment (PP&E capex).

The relationship is uncanny. I’m not suggesting causality—that capex (which is publicly pre-announced) determines the share price level—but I am suggesting that there is a valuing of Apple as a producer of goods (for which tooling is a handy proxy). There is no sophistication to this formula. The more iPhones are built, the more the company is valued. Obvious.[1]

But it’s not obvious that prior to the iPhone there was iPod, which was a different business (and prior to it was the Mac, ditto.) The stock did not reflect the transitions nor does it assume that anything else will follow. It is, in other words, looking backward, not forward.