In the “Race to a Billion” there is a graph showing Android reported activations and iOS cumulative unit sales alongside cumulative console sales. The contrast between mobile phone platforms and game consoles is striking, with an order of magnitude difference in consumption. The best performing console to date is the Wii with about 100 million units sold so far.

[UPDATE: Thanks to Danny Nemer cumulative sales of Sony’s PlayStation 2 (using production shipments from FY 2000-05 and recorded sales for FY 06-12) is 155.81 million units]

However, that is an incomplete picture of the game platform business primarily because consoles are not the entirety of the business. Mobile (but dedicated) gaming platforms have been sold for some time.

To give a better picture of the game business we prepared the following graphs. The first shows Nintendo’s product lines with actual unit shipments (shown as colored dots in millions of units per quarter) and the trend (shown as trailing twelve months’ average trend lines). 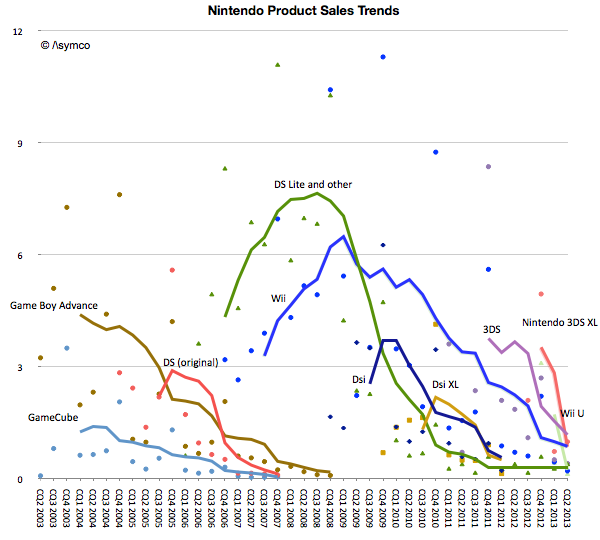 Note that fixed and mobile products are both shown on the same graph. The picture that emerges is that for Nintendo, its mobile platforms combined are more popular than its fixed consoles with a total of 186 million mobile devices sold since 2003.

There is also a pattern of generational change. The GBA, DS and GameCube era was superseded by the DS Lite, DSi, Wii era. The Wii era (or generation) was significantly more popular than the GameCube generation. If there is a problem however, it seems to be that the new generation devices or consoles are not forming a new era. The Wii U and 3DS are not growing nearly to the level of the previous generations and have faded quickly.

To summarize, the unit volume graph for Nintendo is below.1 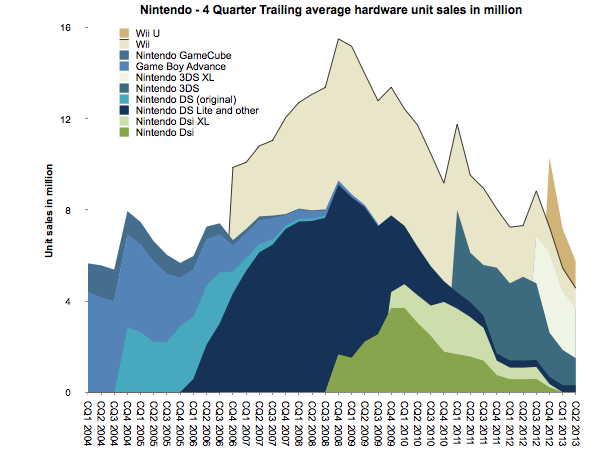 To confirm that this is indeed disruption we should look at the pattern for another competitor in the console market: Sony.2 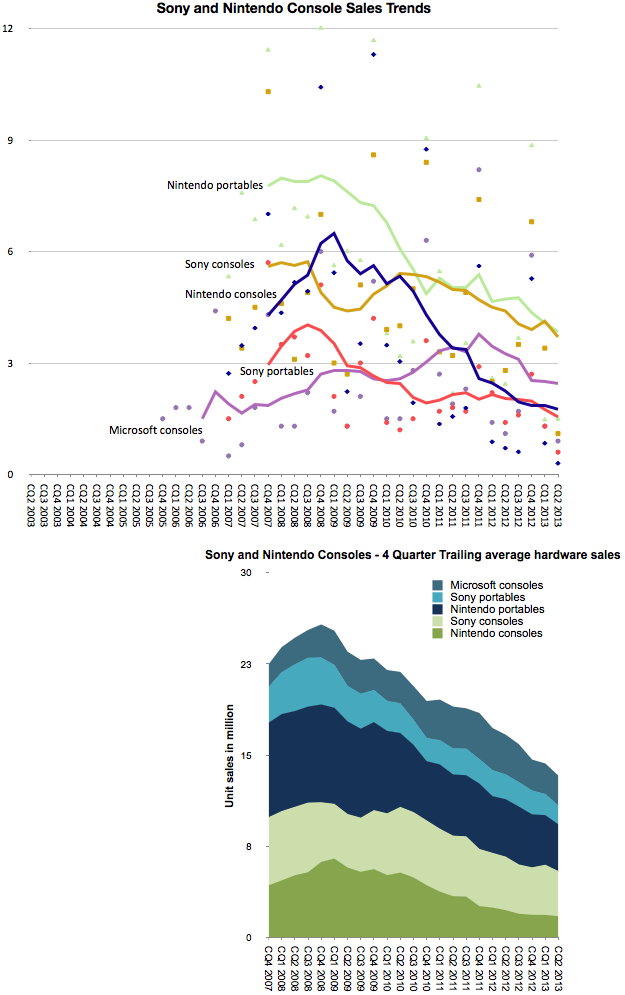 The graphs above combine both Nintendo portable/consoles and Sony portable/console sales. Note the similarity in patterns of growth. It’s one thing to suggest that Nintendo consoles have “failed”, it’s another to show that Nintendo consoles and portables have failed, and yet another to show that two competitors in the games business seem to be failing in unison across all their product lines.  The cyclicality is also over a long period of time: The peak for the combined Sony/Nintendo was in 2008, five years ago.

But the Nintendo 3DS, launched two years ago, was meant to kick off the eighth generation, and the PlayStation Vita was Sony’s response. Then the Wii U was also billed as the successor to the Wii. They have so far failed to re-ignite growth. One might reply that they were merely appetizers and that the main  course of the next gen are the PS4 and Xbox One.

Will they create growth again? Surely not for Nintendo, but I would argue that not for Sony or Microsoft either. There might be a burst of sales at launch as the hard core gamers upgrade, but they are unlikely to recruit new gamers the way the Wii did. In other words the PS4 and Xbox One are unlikely to win against non-consumption.

That is where mobile is the clear winner. More people will hire mobile devices for their primary gaming activity.  And as mobile devices get inexorably better, they will be hired for use in the setting where consoles have been king: the living room.

The implications are that Nintendo, Sony and Microsoft are beyond the point of no return in this industry. Gaming, as a business, cannot be sustained as a platform independent of a general purpose computer. Like other “applications” that used to have systems built around them conforming to their needs3 the dedicated-purpose solutions came to be absorbed into the general-purpose platforms. And the modern general purpose computer is the smartphone.4