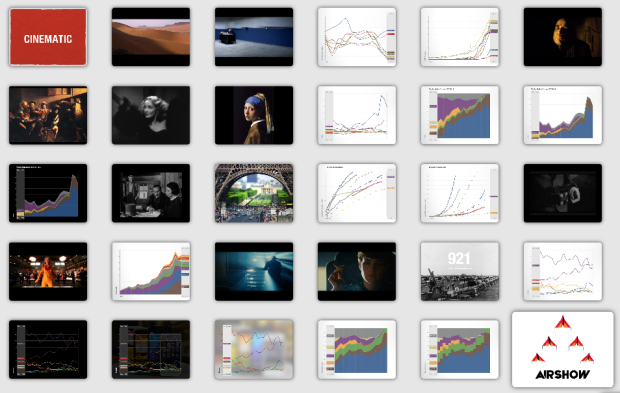 Cinematic is to film as Literary is to prose. It’s not a measure of quality or of beauty. It’s mainly the application of technique to impart an additional layer of meaning to the writing, performance and direction of the medium. Cinematic technique lifts the viewer to another, more profound point beyond the literal.

Whether it’s film, literature, verse, stagecraft or other visual arts, techniques vary but they have the same purpose. They make the audience feel more than what is said.

The quality of a good work of art is that it tells a truth without saying it.

And this, I believe, is what the analyst should also strive for. It is at least what I try to do and, having practiced for a while, I think I can convey some of the techniques I learned.

We don’t have a better word for describing these techniques than “cinematic”. They allow the presenter of complex and rich data to convey meaning with an economy of rhetoric. They draw the audience into completing the picture thus making it their own. They persuade without pleading. They teach without lecturing. They create, in a way, a poetic language for data that combines techniques from several arts, especially cinema.

The means for teaching this is a workshop called Airshow.

Together with IBM, we are proud to bring Airshow to Boston, New York and Helsinki this year.