One of the axioms of hardware business is that prices fall over time. The consumer price index for personal computers and peripheral equipment from 1998 to 2014 is shown below: 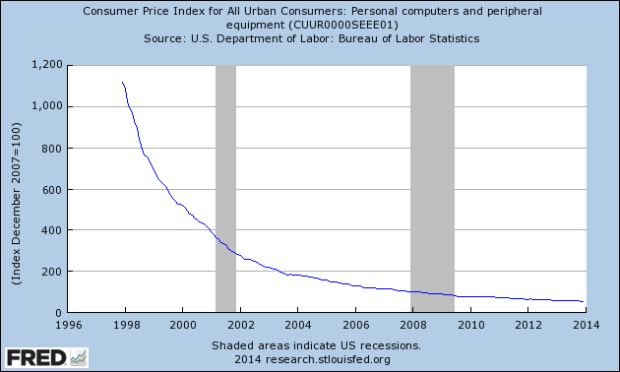 The price index suggests that prices for computers should be 54% of 2007 levels. Charles Arthur illustrated this on a global basis using a separate set of data.

The result is a chronically low margin for computer manufacturers. As Charles points out, the average profit for a PC is less than the price of a coffee at Starbucks. LG and Sony’s exits from the market are symptomatic of the crisis. This is not a new phenomenon. There has been a long series of mergers, acquisitions and exits by incumbents.

Except of course for one incumbent.

The Mac, aged 30, seems to soldier on. Phil Schiller noted that of its original competitors, Apple is the only PC maker to still be in the market. One could imagine that this existence is marginal, or that the Mac managed to survive by giving up on unit volumes or pricing.

The following graph shows the revenue per unit for the Mac and its volumes.

The Mac not only continues to preserve pricing but it also seems to grow volumes at a time of overall market decline. Going back to the consumer price index, the Mac in December 2007 was priced, on average, at $1539. In December 2014, the price was $1322, with $40 deferred.

You’ll note that along with the Mac I also illustrate the pricing of Apple’s other devices. Even with the iPod, the pricing has remained stubbornly consistent for over 7 years. Whether the volumes are falling, rising rapidly or remaining flat, Apple’s product pricing remains predictably consistent.

But we already know that. Jony Ive told us as much:

The result is plain to see: Caring about the product means that it can be priced at a point which consumers care to pay.

Trouble is, judging by how Apple is valued, nobody believes that this is sustainable. Regardless of the evidence within Apple’s own history, it’s the exception, not the rule and the bet continues to be that they cannot continue to remain an exception.

Is Apple going to continue to repeal the laws that govern its industry, as it has for decades, or will it, as the market expects, abide by them?