During the latest shareholder meeting Tim Cook revealed that Apple TV sales were above $1 billion in the last fiscal year (ending September 2013). The company later clarified that this figure includes device and content sales.

This poses a problem. In previous statements the company cited device (unit) shipments rather than value. The statements made to date suggested that cumulative volume of 3rd (current) generation Apple TV totaled 6 million units as of January 1, 2013.

The following graph includes an estimate of quarterly Apple TV sales based on comments made to date. 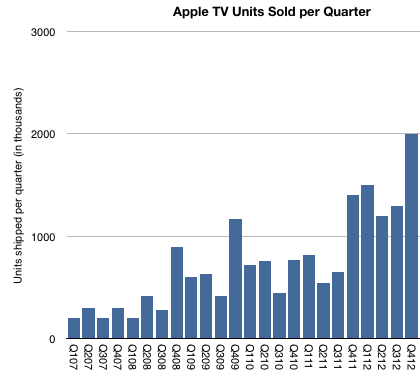 As there were no additional comments during 2013, the “Billion Dollar” quote is all we have to go with for the year.  The problem with trying to separate content from hardware is complicated by several factors:

All this makes the Billion Dollar Hobby a puzzle. The way I can make it square with existing assumptions is by saying that “Apple TV content revenues” are mostly, if not entirely, distribution revenues from channel placement rather than iTunes purchases.1  As a result, my best guess now is that there were about 7.6 million Apple TVs sold in fiscal 2013, with a bit over 8 million for calendar 2013.

If I’m right, the complete history of the shipments would be similar to this graph: 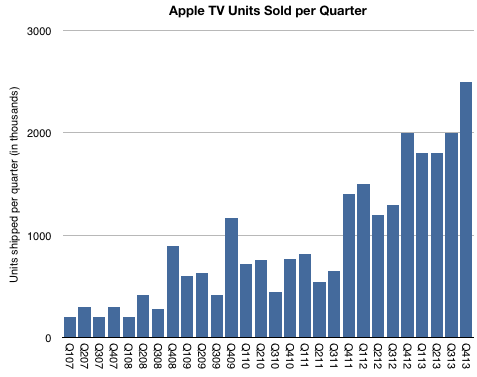 By Apple standards this is indeed a modest story. The total units sold would add up to more than 25 million units with healthy growth. But it would not be in the same magnitude as other iOS devices which have so far sold 800 million units.

More important than this picture however, or the Billion Dollar Business threshold, would be a better understanding of how Apple sees Apple TV as a business. We already knew that it was a low value hardware business. I even suggested that it’s “Apple’s equivalent of the Kindle”: Hardware sold at low margins as a gateway for a high volume content business (iTunes). The problem with that model is that selling other people’s content is never a good margin business. If it were to be sustained, Kindle may ultimately have to become an Amazon Prime salesman.

So that leaves the Apple TV as a product without a satisfactory business model. Unsatisfactory, at least, to Apple’s standards; hence the hobby label. But what if the model is turning out to be a platform for discovery of content and therefore the equivalent of (dare I say it?) a portal!2 The TV UI certainly limits search or traditional browsing interaction but it enables eye candy for a few choice placed offers. It is a low interaction model. Think of how the prevailing UI for TV for decades has been that of pressing one button repeatedly, also known as channel surfing.

If so , the business of Apple TV may be the auctioning of the real estate on the landing page. In some ways this is how iTunes is already behaving by “featuring” exclusive music content.

There are all sorts of implications, which I will leave as an exercise to the reader.