When trying to assess the success of an ecosystem, the primary measure is the size of the user base or the “audience” for the product. Companies like FaceBook and WhatsApp and Twitter are measured first and foremost on this metric. Companies like Google, Amazon, Apple and Microsoft are less so. When revenues are firmly attached to products the focus shifts to “follow-the-money” rather than “follow-the-users” metrics.

That’s as it should be, but for the sake of understanding the competition between ecosystems, they should be compared on some similar basis. If the basis of competition in this day and age is ecosystems1 how does one evaluate Facebook’s vs. Microsoft’s? Or, more poignantly, how does one compare WhatsApp’s valuation with that of iMessage?

It’s common to value a company which aggregates audiences at a multiple of that audience size. The implication being that each member of the audience returns a certain cash flow to the aggregator and the discounting of those flows is the net present value. Which is why, for example, a newspaper is valued in terms of its subscribers. As is a TV network and as might be a social network. Using this metric, a WhatsApp (i.e. free messaging) user is worth $40 and the average social media user may be worth around $100.2

The implication is that users/subscribers/audience members are loyal and will stay with the programming for some time. There is also a second implication that businesses which are not measured by audience size don’t have this loyal and recurring revenue base. The absence of an “audience” implies transience and impermanence and results in deep discounting of long-term viability.

Which is why ecosystems are the desired business construct for technology companies. They allow a more consistent and repeatable transaction model and offer predictability which is sorely lacking in the rapidly changing technology industries. It allows a company to define itself on its customers rather than on its products.

However, old habits die hard. Regardless of the exhortations of product companies, the notion of being valued on audiences is reserved for the service-oriented. Hence the outburst from Tim Cook at the latest shareholder’s meeting. Reports have him saying that:

Apple now has 800 million iOS users and has handled over 16 trillion push notifications, with 40 billion new ones occurring every day. Apple also delivers several billion iMessages and FaceTime requests every day. Cook added that iPad now accounts for 78 percent of all tablets used throughout the enterprise.

Trillions of push notifications aside, the claim that Apple has 800 million iOS users seemed way out of line. This is because the number of iOS devices (excluding Apple TVs) shipped through to the end 2013 was exactly 774,336,000. One could easily imagine another 25 million or so since, giving us about 800 million sold, but I cannot see the number in use being the same, and even if they were, the number of users being the same.

The following graph shows the claim in context of shipments. 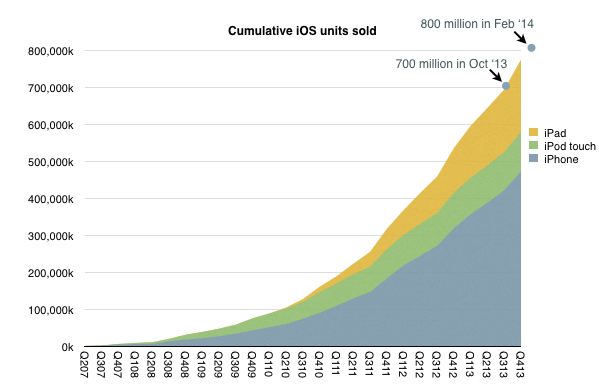 Note that last September Cook made the claim that 700 million iOS devices “by October”, which did indeed happen. The 800 million claim in February is certainly believable in that context.

Determining the total number in use is a very speculative exercise. Assuming useful life of 9 quarters for iPhone and iPod and negligible iPad retirements yields about 560 million iOS devices in use. Obviously this can be very inaccurate as also there can be multiple users per device but the claim of 800 million users seems very hard to reconcile.

Perhaps he was mis-quoted or he mis-spoke but the real question isn’t the exact number but rather the implication that Apple should be seen for its users rather than its quarterly shipments.

[Update: Thanks for Philip Elmer-DeWitt’s investigation, Apple clarified that Tim Cook referred to 800 million as the number of iOS devices sold not users of iOS. He was mis-quoted.]