Three years ago Apple’s Greater China Q1 sales were $2.22 billion or 9% of total. This year they were $9.29 billion1 or 20% of total. Over this time frame the growth in China was about 320%. The second fastest growing reporting segment was Japan with growth of 187%. Europe was third with 70% and Americas fourth with 53.5%. Rest of Asia/Pacific had the smallest increase of only 4.1%.

A graph showing both the absolute and relative sales levels for the reporting regions is shown below. 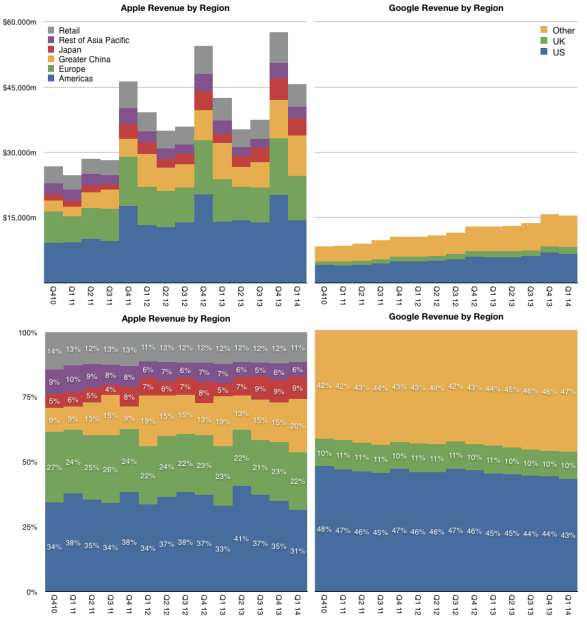 As overall sales have increased significantly, the revenues from the Americas and Retail combined (as most stores are in the US)2 went from 51% in Q1 2011 to  42% in Q1 2014. The 11 point increase in share for China can be thus seen as mostly at the expense of the US. As Americas did not decline more appropriate statement would be that China captured much of the growth of the last three years.

Note that I also included Google’s revenue split3 in the graph above. This is partly to calibrate Apple’s mix and to understand if the expansion outside the US is mirrored by other companies.

Google, in particular, is largely absent from the Chinese market and the only regional detail we have for their revenues is the US, UK and Other. That leaves an analysis of the dependency of each company on the US market.

Google’s US revenue percentage did drop from 47% to 43% but it’s worth noting that not only is the drop slower than Apple’s, the overall dependency of Google on the US for revenues is higher than Apple’s.

A surprising observation as Apple’s concentration of users, measured as market share for various products, is likely to be higher in the US than Google’s distribution of users.

Put another way, Google is broadly popular world-wide (except for search in China, Korea and Russia) but its customers and hence profitability are highly concentrated.