ABI Research estimates that AOSP (or forked Android) is the fastest growing mobile operating system with a total share of units shipped of about 20%. This is not surprising considering that most Chinese vendors don’t include standard Android into their products. Indeed the current leader in China, Xiaomi has its own take on Android and includes a unique UI and set of services. This is also not a new pattern, Amazon’s fork of Android has been in development for many years and powers the second most used tablet in the US.

If one looks at the volumes of smartphones shipped by vendor, the most rapidly growing (Huawei, Lenovo, Xiaomi, ZTE, Coolpad and “others”) are likely to be using forked versions of Android. 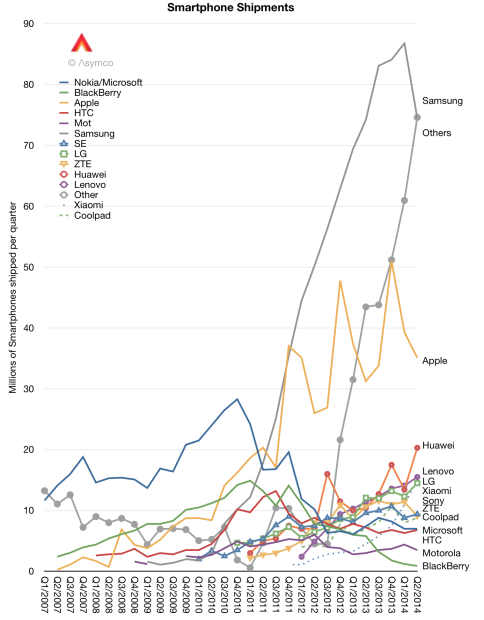 The reasons for this are many: a reluctance to deal with Google’s obligations,  Microsoft’s IP licensing costs1 , potential litigation, politics (including bans on Google services in certain markets), etc. But the most likely reason is flexibility. Vendors competing on price and localization are looking to move quickly against each other and can’t wait for blessings from above. Belonging to some “Alliance” and all that it entails is just too much to ask for companies that are, so to say, delicate.

The value of a singular Android version is not just being Google-friendly but also being better managed and more BOM-friendly. Google is trying to solve the control issue with ease of use, but still retaining control There will be alternatives however which are both easy and “open”2. It seems that there is an opportunity for a hardware-independent vendor to take AOSP and provide a complete solution to local phone brands so they don’t need to expend efforts on integration. A non-Google One, so to speak.

Why it’s likely is that openness in software makes sense when parts of the stack become commoditized. Google took advantage of the commoditization of operating systems (i.e. Linux) to deliver non-open services on top. However, it’s inevitable that some of those very services will also be commoditized and therefore that the portions of the stack which sustain Google will be forked as well.