In Q3 2014 Apple’s revenues were 5.3% higher than the upper end of their guidance. This is the highest error in guidance since the new range-bound  reporting regime started two years ago.

The following graph shows the guidances given since 2005 and the actual revenues. The error (as a percent of upper guidance) is given in the second graph. 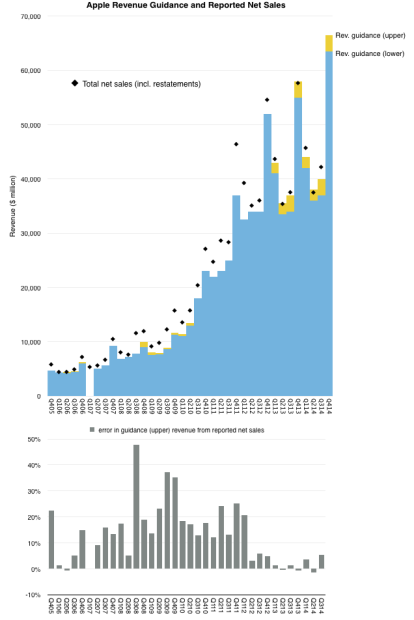 Note how since the newer, presumably more accurate method was introduced in 2012, the errors have decreased on average. As a result, for these two years, forecasting performance for Apple was no longer challenging. The only questions for the analyst were how to allocate the revenues among products and to guess how many shares would be retired.

Is this about to change? Could forecasting make a comeback as sport and leisure?

Assuming no error in Q4 yields the following shipment forecast:

That’s about 95.5 million iOS devices in the quarter. That also means that the one billionth iOS device will have been sold sometime in the next few weeks.12