I tried to assess the opportunity of Apple Pay but found it to be mostly dependent on how quickly card payments will overtake cash. It seems that as payments move to a digital format they will move to a mobile device. The hurdle isn’t going from a card to a phone but from cash to card.

The Total Addressable Market for Apple Pay then is dependent on how quickly this pattern repeats over the markets where iOS devices are in widespread use. Once cards are in use they are used with higher frequency and quickly overtake cash for the user.

The only assumption that needs to be made is that the device then replaces the plastic card. This seems a safe assumption as the benefits of the device as payment authenticator are high and the costs are negligible given a penetrated market.

The following graph shows an extrapolation of transaction volumes where Visa and MasterCard and Amex are showing moderating growth with UnionPay showing 20% constant growth through 2019.1 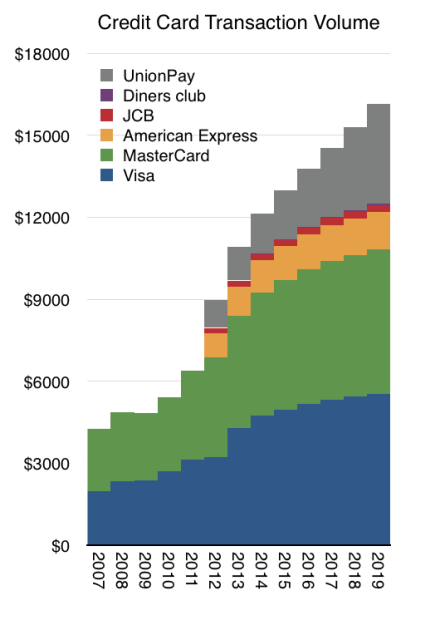 Two more assumptions are needed: the share of transaction value captured by Apple Pay and the Apple Pay fee. I used 15 basis points ($15/$10000) as the assumed Apple fee and a share schedule as follows:

These assumptions result in a cumulative revenue of over $1 billion by 2018 and a yearly run rate of $1 billion in revenue by 2020.

Although this is not a huge amount relative to Apple’s overall revenues2, it’s important to note that these revenues are likely to go directly to earnings3 as there are negligible costs associated with the transactions that Apple needs to bear.

These assumptions make the statement that Apple Pay can become “A Billion Dollar Business” plausible by 2020. Perhaps sooner.