Paying for TV has been a curious consumer phenomenon. There was a time when TV was free to consumers. It was delivered as a broadcast over-the-air and paid for either by commercials (US mostly) or by taxes on viewers (Europe mostly). The consumers were delighted with the idea as it was far better than radio and radio was delightful because it was far better than no radio.

The process of convincing consumers to pay for something that used to be free was quite interesting. The first benefit to be articulated was that the quality of the picture would be much better. It would, in essence, be noise-free.1

The second benefit was an increase in the number of channels. VHF and UHF television would cover about three and 5 channels respectively while cable could offer dozens, many specializing on specific types of content like the Home Box Office (HBO) offering movies and ESPN offering sports only and MTV music videos and CNN news only.

The third benefit was fewer (or no) commercials for some of the channels. This was especially valued by fans of movies whose interruption by commercials was often detracting from the immersive value and continuity of the cinematic experience.

These benefits were very attractive during the 1980s, to the extent that about 60% of US households adopted cable. An additional group later adopted satellite-based pay-TV as the technology became reasonably cheap. 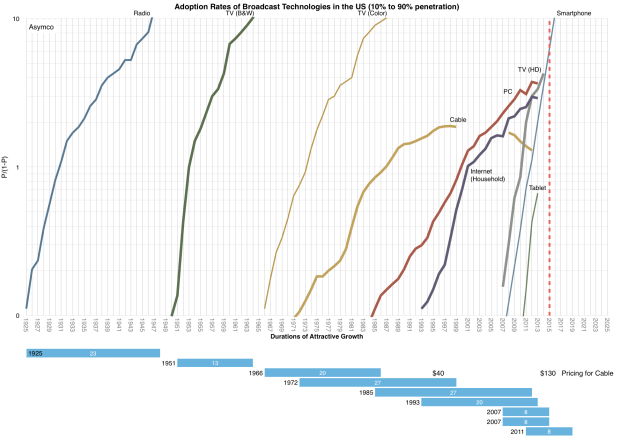 These benefits were priced modestly but as the quality and breadth of programming increased, prices rose. An average cable bill of $40/month in 1995 is $130 today2. Some of that revenue went into upgrading the capital equipment in use (the plant) and some into paying for the higher production values. Yet more went to the sports leagues and their players whose business models increasingly depended on broadcast rights.

And so over a period of about 40 years, watching TV went from free to quite expensive. More expensive even than a family’s communications costs (i.e. telephone service.) That’s quite an achievement at a time when technology diffusions caused huge price reductions in other goods and services. Consider that the TV set used to watch the programming improved dramatically while decreasing in price over the same period.

Meanwhile, some of the benefits began to be less relevant. Commercials are more abundant than ever. Ad buyers spend about $60/month per household to deliver ads3 The quality of the TV picture is actually worse due to compression than one might get with over-the-air digital broadcast. Finally, the abundance of channels is beyond anyone’s absorption rate. Those channels which used to be “pure” became polluted and undifferentiated as each tried to be the other.4

On top of these paradoxes is the fact that actual penetration of the service has been declining. As the graph above shows, Cable TV has declined (though Pay TV much less so). The industry has reached saturation decades ago and has not offered anything meaningful in terms of innovation.

Disruption theory suggests that once a product over-serves on meaningful bases of value creation (and underserves on value) it opens the door to disruption. Which leads me to ask not whether cable is past its prime but rather why it’s still around?

So again, why have all the people been fooled all this time? Twenty years have passed since the industry reached saturation and prices keep rising. Today the average cable bill is projected to rise to $200/month by 2020.

My answer is that disruption is predictable. Users are cutting cords, the “uncabled” or “never-cabled” are a significant portion of the population. 13.5% of broadband households with an adult under 35 have no pay-TV subscriptions. 8.6 million US households have broadband Internet but no pay-TV subscription. That’s 7.3% of households, up from 4.2% in 2010.  Another 5.6 million households “are prime to be among the next wave of cord-cutters,” according to Experian.

The same phenomenon occurred with mobile vs. fixed telephony. For several years it seemed that mobile was sustaining to fixed or that fixed was immune due to lock-ins. The fixed telephone incumbents insisted that the data was inconclusive. Then the trickle of abandonment turned into a deluge. The quality of service for mobile kept increasing and, with data, it became clear that the mobile devices could unleash unfathomable functionality and value.

And so it goes. A business dies first slowly then quickly.5 The exact timing is tricky because of the non-linearity of the phenomenon. It’s also hard to declare end-of-life since business zombies are very common. What is clear however is that the economics will change dramatically and the alliances between talent and distribution will shift to entrants and away from incumbents. The point when we will look back and say that cable was finished will probably come by the end of this decade.