Anshul Gupta’s assertion of market saturation was not the first. IDC also cited “a number of mature markets nearing smartphone saturation” in late 2013.

Shortchanging the smartphone market is nothing new. It was happening very early in the market’s formation when initial growth was not as rapid as expected. I recall Nokia managers disappointed with sales growth losing faith in smartphones in 2004.  Eleven years later, the market is still growing. 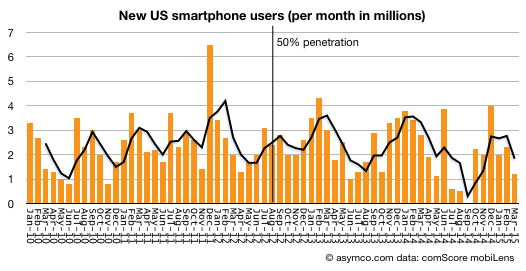 Since the end of 2013 when both IDC and Gartner declared the onset of saturation in “mature regions”1 31.5 million new-to-smartphones Americans adopted the product. That’s an addition of 11% of the sampled market.

And the sampled market is just a subset of the addressable market. comScore only counts ‘primary phones’ in use and excludes company-purchased devices and any users below age 13.

So according to comScore’s data, the US market is at 77% smartphone usage. My assumption is that saturation would come at the earliest at 90% and could be 100%.2 The fact that conversion to smartphones is still proceeding at roughly the same rate it has been for five years, makes this assumption pretty safe.

The pattern of growth fits a diffusion S curve (Logistic curve) as closely as ever:

Note that the curve continues to rise even into 2020, and that this is the US only.

The US is the most highly penetrated market but it’s not the biggest. That would be China. So it’s not surprising that two years after declaring US growth was over, IDC claims “China’s smartphone market has reached saturation“.

Chinese penetration is far below the US. It was estimated at 43% by the end of 2014. If we assume Chinese users are no less hungry for information than US consumers, then why should Chinese stop adopting the technology at less than half of US levels of use?

That would be risky.

This understanding of the maximum potential of a market — its highest level of user adoption — is crucial for product development. Paying attention to short term sales trends blinds you to the power of the job your product is hired to do. Your product’s purpose is not to be sold, but to be hired. If your product is powerful enough, it can be hired for universal jobs and it should be desired by all consumers, not just the fickle.

Being patient for growth means that you can release features when the majority of users can absorb them, not just when early adopters choose to play with them. Often, early adopters offer feedback which is off-putting to later, mainstream adopters. In engineering and design one has to always make compromises. The right balance at the right time avoids overshooting a market or under-performing against competitors.

There are plenty of examples of getting it wrong (see the graph on the right above).

At this stage in the US market, the iPhone has more than 80 million (sampled) users.  Android has about 100 million. It’s still a growing market so apart from BlackBerry,3 the churn between the smartphone platforms is still minimal. The two main platforms are still harvesting non-consumers. 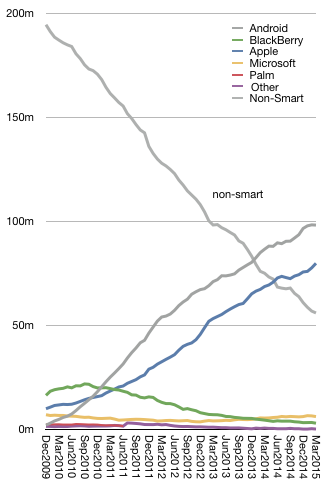 Update: comScore just published US Smartphone penetration by Age which offers some clues where smartphone hiring is still going on.  (Note: <13 ages are not shown).