The fact that the iPhone is contributing over 90% of the operating profits in mobile phone sales has penetrated even as far as the Wall Street Journal. However, it’s not yet commonly known that the Mac captures a majority of personal computer operating profits, at least when considering the sale of hardware.

My calculations suggest at least 60% of operating margin in personal computing hardware is captured by Apple. This is mainly due to the fact that the average Mac sells for more than $1200 while the average PC sells for less than $450.That is equivalent to $1.5 billion per quarter for Apple vs. $930 million for all the other PC makers combined. 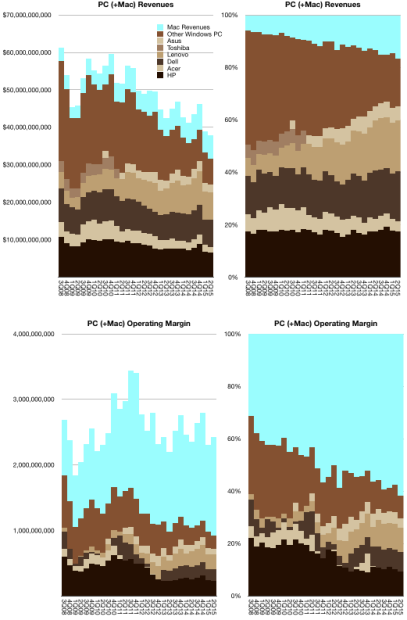 If we are to consider the iPad as a “PC equivalent” computer1 then another $billion/quarter is contributed to the profit pool. It increases Apple’s share of profits to 73%. As a result, Apple absolutely dominates computing profits.

But, as we know, computing, even on handheld devices, is enabled by a multitude of business models. Selling hardware is one thing, but Microsoft showed that one could sweep up profits in the industry by selling enabling software. It’s much harder to assign a share of profits if we try to consider all the business models associated with computing and all the form factors that computing has taken shape in.

The problem can be acutely observed with the iPad alone. It’s sold with a decent margin2, though not one which approaches that of the iPhone3. It also enables an ecosystem with thousands of collaborating firms and users.

Consider the uses of the iPad in education. 15 million iPads were sold to educational institutions. An unknown number of millions have been hired for education uses by end-users or teachers. The result is over 100,000 education apps are available in the App Store.

The education sector’s “jobs-to-be-done” has led to the product being associated with entire new processes for education. Education is not a product but a process and therefore any technologies must be hired as part of the process. In the App Store you can see the “Apps in the Classroom” guides along with impressively powerful apps being used in education. These are educator-created guides designed for other educators.

There is no way to measure the “profit” in this endeavor.

Nor is there a way to capture the “profit” in people engaging in exercise because they wear an Apple Watch.

Nor is there a way to track the operating profit of HealthKit which has enabled 1000 apps to help people manage their health.

These education and health efforts are not designed to be profitable. And yet Apple is very profitable. That is because creating valuable things generally leads to value being accrued by their creator. How that happens is not very important. Indeed, focusing of the how is actually often self-defeating. What matters is the why and the what is done.

Understanding this leads us to understand the foundation of any great organization, not just Apple.