Will there come a time when Samsung will earn more profits from the iPhone franchise than from its own Galaxy product line?

The problem for Samsung is that although it still sells the most phones1, and the most smartphones, the price and margins for these products are collapsing. The pattern is shown in the graphs below: 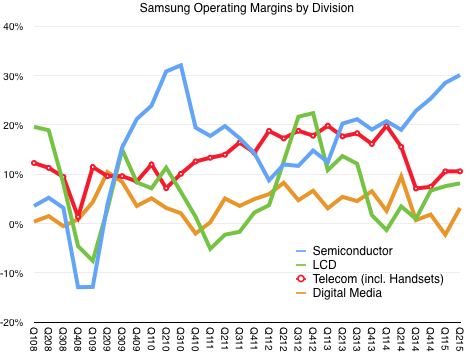 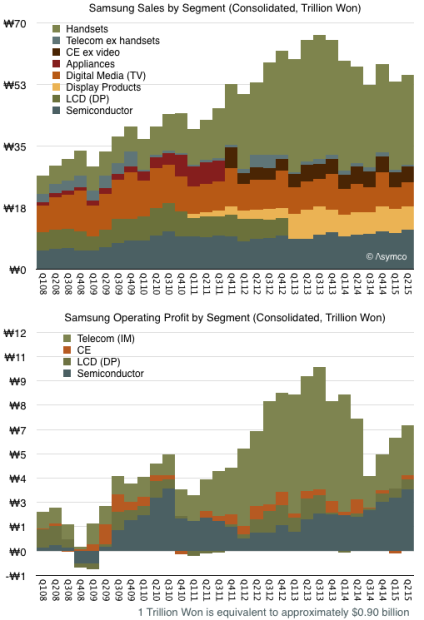 Phone operating margins peaked in Q1 2014 at 20% but are half that level today. These margins have dropped to levels Samsung had in 2009, before the Galaxy launched and before they had any substantial revenues from smartphones.

In contrast, the semiconductor group is growing both revenues and margins. Margins and operating profits are both 50% higher than those of devices.

We also know that Apple is Samsung Semiconductor’s single biggest customer. We can’t be sure how much of the total revenue/profit comes from Apple but if the pattern continues then Apple could be the greatest contributor to Samsung’s profitability in the near future.

How could this be? Wasn’t Samsung supposed to “disrupt” Apple?

The reality is that Samsung’s own smartphones are being disrupted by good-enough Android devices, typically made by Chinese brands. This low-end disruption is also affecting LG, another phone maker and Apple supplier.

Unlike Samsung and LG, Apple is less susceptible to low-end disruption. What Apple offers is a brand promise, an ecosystem, associated products and services and what amounts to a new market. It’s this parallel value network that competes with Android/Google, rather than with Samsung.

Neither position is one of control, but the current market stage benefits Samsung within the Apple ecosystem more than  in Google’s ecosystem. It’s a situation analogous to one where Intel made both x86 chips and PCs that ran Windows. Long term it’s likely that the sole-source chip business does a lot better than the multi-source systems business.

That should be a warning to others who hoped to survive as Android OEMs. They don’t have semiconductors to sell to Apple.