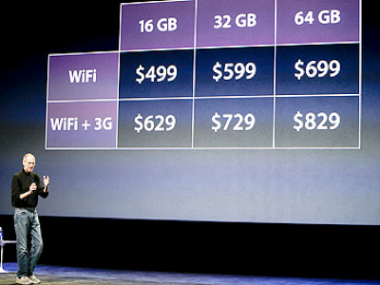 I think it’s a logical evolution of mobile computing. A hop along the trajectory. When the iPhone first rolled out as an embodiment of the new touch-based UI–a disruptive technology, I said it was far too good as a phone. It could not be a better phone because phones were as good as they could be. It was a pretty lousy computer so I reasoned all it could become was a better computer. The iPad is a better computer.

Will it be a big hit? I think it will grow nicely and be profitable. It will take several iterations but eventually it will absorb usage from low-end laptops and move computing to new contexts. It will have amazing applications in certain verticals like education, health care, travel and automotive use.

All these steps are like checkboxes in the disruptor’s playbook. In 5 years, this will be as big a business as the Mac and then Apple will have to think how they break out of the 5% share ghetto.

Will there be a response? Yes, but, like with the iPhone, not for a long time, and not symmetrically. The PC guys will dismiss this and the phone guys will see it as outside scope. Once they begin the effort in earnest, it will fall well short of the entrenched, incumbent, integrated(*), rapidly evolving juggernaut that will be Apple Mobile Computing.

(*) Note the emphasis from Apple on its own CPU in the device. Apple does not talk about chipsets in their devices, but they did this time. Not only are they signaling control, but it also shows that value-chain integration down to silicon is what is needed to go up the performance trajectory for good-enough mobile computing.