Admob did an interest survey. Although limited by its methodology (see below) the data is incrementally interesting as it also relates to the ChangeWave survey. 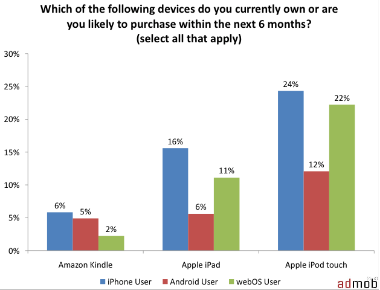 ChangeWave suggested that 13% of early adopters claim they are likely to buy an iPad. Admob suggests that 16% of existing iPhone users would be likely to purchase an iPad in the next 6 months.

This is interesting because we know roughly how many iPhones there are.

If we assume 45 million iPhone users by time of launch (42 million units have been sold as of end of December) and 15% would buy iPads it would therefore not be unreasonable to assume about 7 million iPads will go to iPhone users alone.

Being conservative, let’s round that down to 5 million. This does seem quite a bit more than the 2 million most analysts are forecasting. I’m partial to 5 million but I might now be inclined to increase that to maybe 7 to account for a portion of 33 million iPod touch users.

The aggressive scenario would see 16% of the 75 million iPhone + iPod touch installed base buying an iPad–resulting in 12 million units.

All data in the feature section is based on an opt-in survey taken by users on their mobile device.

Respondents were sourced by responding to mobile ads throughout AdMob’s iPhone OS, Android and webOS networks. There was no incentive offered to participate in the survey.