Following up from the last article on the global phone units sold over the last three years (Visualizing the winners and losers of three years of smartphone share growth), we take a look at the sales in dollar terms over the same period.

However, when we look at their performance in value (dollar sales) vs. units sold, the performance of the entrants begins to look miraculous.

The sales figures can be obtained from the company reports, though I caution that not all vendors publish data and data published is in local currencies. Fluctuations in exchange rates may lead to differences in reports of sales from different sources.  For the sake of consistency, I omit all “other” vendors and focus on the top seven: Nokia, Samsung, Motorola, LG, Sony Ericsson, RIM and Apple.

First, the cohort’s overall performance is shown in the following graph:

I again annotated Nokia and RIM and Apple with actual sales (USD) figures for some perspective.

The second thing to note is that the Apple+RIM group grew from 3.3% share of cohort to 26.6%.  That means that more than 1 in 4 dollars sent to these 7 companies was spent on Blackberries and iPhones! 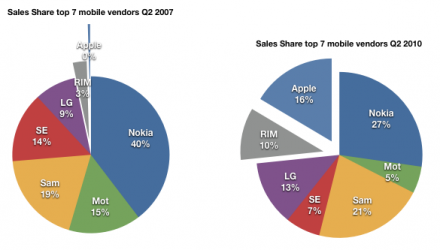 Jointly, Apple and RIM took $8.6 billion and Nokia took $8.8 billion.  Compare that with three years ago when Nokia took 40% of the income and RIM + Apple took 3%.

So whereas the entrants increased units share by 6x in this time period, at least in this large subset of the market, they increased revenue share by 8x.